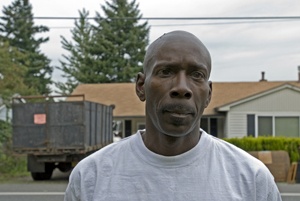 Henry Lynch was in the process of expanding from self-employment as the sole proprietor of Henry Will-Haul and Company LLC, hauling and landscaping, to a new career as a union journeyman roofer.
He invested the money he inherited from selling his family home in the Hawthorne District and bought a new house with room to accommodate his roofing, landscaping and hauling equipment.
But after the training, then the apprenticeship, and then acquiring the equipment he needed for his company, the economy started sliding. It became harder and harder to find clients.
Then, just as news reports revealed  the stock market was collapsing, he found that the loan he'd signed to buy a house in Northeast Portland, with space enough to house his new business, became impossible to refinance.
"I came over here and got a nice house, should have put more money on it and paid it off," he says. "Then after about six months, I couldn't finance it."
Lynch had a high interest rate, 9.95 percent. He sank almost $70,000 into the property.
Forget about Joe the Plumber. Lynch and other blue-collar property owners are in many ways the true face of working America today – and they're struggling against the prospect of losing it all.
"I'm stuck with the $1,624 mortgage payment a month," he says. "I should have been able to get financing, my credit score hadn't changed much — but then the markets dived."

Foreclosure Counseling
Burbank, Calif.-based WMC Mortgage – a failing subprime unit sold off by its original owner, the General Electric Corporation, last year — bought out Lynch's loan from the original mortgage broker. "They called and said that they'd give me a home rescue loan – a home rescue program is what it's called," he says. "And I'm not sure if it's true or not, or if they're gonna just rip me off for the money? Because they know that I'm desperate."
In fact federal justice department records show WMC Mortgage is currently embroiled in a "truth in lending" lawsuit brought by a disgruntled borrower in Rhode Island District Court.
Carol Berger, of the African American Alliance for Homeownership, has counseled almost 50 homeowners since August. As a professional foreclosure counselor since 2000, she says she's watching the number of homeowners in Lynch's situation rise.
"There are a lot of people finding us, and that's not going to be unusual, I see that happening for a few years," she said. "It's a problem that took time to get to this point, it's going to be a problem that's going to take time to work itself out."
The alliance offers free one-on-one homeownership counseling, as well as foreclosure prevention counseling, all year round. The non-profit organization is holding its 10th Annual Homeownership Fair this Saturday, Oct. 25 from 10 a.m. to 2:30 p.m. at the Emanuel Hospital Atrium, 501 N. Graham, with free ice cream, raffles and drop-in professional advice for new homebuyers.
"People who got into the bad subprime loans did it because they thought they were only going to be in them for a couple years and possibly get another loan that's a better loan — that would be one trend," she says.
"The other trend, and it's a big one, one of the incomes is lost — whether the husband or the wife was working one of them has lost and they've gotten their home loan on two incomes, so when one income goes away they're behind already."

First Step: Budget
Berger says her one-and-a-half-hour counseling session starts with building a budget, and goes into what can they do to save their home.
"If at some point they get stuck on a step, they can call me and I will call on their behalf to the lender to try and get that resolved," she says. "A lot of my work is looking at the resources so that they have all the resources they need to make things work."
Berger also talks to her clients about "lifestyle."
"I tend to want to explain to them that you bought this house in the consideration that you wanted this certain lifestyle, is that still appropriate? Is that the lifestyle you want to lead for the rest of your lives?"
Berger says most of the people coming in for counseling are over 40. "A lot of the times they're looking at, you know, this house may not be the place I want to live for the rest of my life, maybe I do need to look at something else.
"Some are coming in and saying, this is all I have. If I were to leave, what would I do? And so then you have to work on saving that home, doing everything to save that home. And that's making sure you talk to the lender before you leave this office, that's to me very important. Giving their options."
"I'm always giving people solutions, and the solution may not be saving the house," she says.
Out of a Home
Lynch is worried that he may become part of that throng – people who can't save the house.
In fact his worry over the outcome of his case has driven him to a paralyzing emotional depression.
In order to refinance, he has to come up with about $3,000 – not that much in the big scheme of things. But he simply doesn't have the cash in the bank.
Without the cash in the bank, he can't get a loan to pay back his now-defaulted mortgage, and the fines and penalties grow.
And every few days, someone who's seen his property listed on a foreclosure database such as RealtyTrak.com knocks or calls, and offers to buy him out for less money than his property is worth.
Lynch's effort to sell off his valuable roofing and hauling equipment for the cash he needs didn't pan out – the city of Portland recently slapped his house with a nuisance order when he arranged the heavy machinery in his yard for prospective buyers to examine.
"It's scary," he says. "Meanwhile, I don't know whether to pack up my stuff, where I would go, or if I can just dig in and fight."
Recent news reports from the presidential campaign trail have been full of the Ohio man known as "Joe the Plumber," who confronted Barack Obama over the issue of whether he would raise taxes and hurt small business.
Obama has called for a 90-day moratorium on home foreclosures. John McCain advocates a government buy out and mass renegotiation with homeowners.
Lynch watches the news every day with hope that President George Bush or Congress might enact a debtor's bailout or Obama's suggested freeze on foreclosures.
"With this $700 billion dollar thing, it gives you hope," he says. "That's what I was hoping, that President Bush would do something to put a stop to this nonsense. There are people out in the street, literally, who don't have anyplace to go. What are those people doing?"
Lynch has until Jan. 9 to refinance his home, before the foreclosure is final.