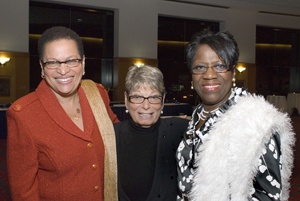 The Urban League's Annual Equal Opportunity Day Dinner this week featured a keynote address by Dr. Julianne Malveaux, a columnist, economist and president of Bennett College for Women in North Carolina, left, and a special award bestowed to former Portland Mayor Vera Katz. The event, a who's who of Oregon leaders, was also attended by state Sen. Margaret Carter, right.

To watch a slide show click on Urban League

The Urban League of Portland this week threw its gala Equal Opportunity Dinner, celebrating the upcoming release of their landmark "State of Black Oregon" report and honoring former Portland Mayor Vera Katz with a special appreciation award.
The event's featured speaker was Dr. Julianne Malveaux, president of Bennett College for Women in North Carolina.
Malveaux, an economist and political columnist, spoke with The Skanner earlier this week about the state of the nation and local communities.
Asked what is the most important issue facing Americans today, Malveaux did not hesitate: the economy.
"All of the series of related economic issues, how people are surviving in an economy that seems to be contracting with a series of survival and banking issues that people are confronting," she said. "With the labor market shedding last month 150,000 jobs and having been shedding jobs for the past 10 months, with fuel prices oscillating and trending upward, people who are basically middle class people earning somewhere near the median income of 50,000 for a family of four are having a really hard time — I think that is singularly the most important issue."
Many other factors are linked to that central issue, she said.
"There are a series of issues that come out of the economy that are economically related, such as health care," she said. "What happens to someone who doesn't have access to health insurance, what happens to someone who is sick? We have seniors who are making decisions about whether they can take a whole pill every day as they are prescribed or whether they have to take less, or people who are doing things like alternating their medicine because they can't afford it, or deciding whether they're going to take their medicine or eat.
"So there are a whole series of health care issues that are connected, and it's not just the older people who are effected, younger people are having similar challenges, people are having challenges with their children," Malveaux said. "You have a whole cohort of people whose health care is being delivered through emergency rooms.
"And then you have the education piece, because if you want to look at what the economy will look like in the future you have to look at education now, and our k-12 education, especially in the inner cities, is often abysmal," she said. "On my end as a college president, we know there's an affordability challenge, it's very difficult for a lot of people to go to college. They have the ability but not the affordability."
Malveaux tied the domestic scene to international concerns.
"Clearly I'm looking domestic; if we want to look international we certainly want to talk about world security, not just U.S. security, but world security," she said. "What the U.S. has done to imperil world stability in terms of this so-called war on terrorism – look at it not only in terms of what it's cost us, but what has been destabilized, and how other countries now view us."
The Skanner asked Malveaux for her take on the presidential elections. "I hope everybody votes," was her instant response.
She continued, "Obviously we're making a choice about direction. You can stick with what we've seen over the past eight years or we can move in a different direction. I think we have some very, very compelling arguments in favor of moving in another direction — the first of which would be the economy.
"But I think that first of all we've got probably about 30 million women of color who don't vote — not just African American women but all women of color, it's a statistic I came across today," she said. "We've got to get people engaged and involved and we've got to get people to vote their economic interest and not believe the hype.
"I mean if I hear the words Barack Hussein Obama again I think I'll just scream," she said. "People are playing a lot of games around this election. I see a lot of organizations that I know as organizations, like ACORN, being besmirched. People need to participate, people need to vote. People have this one-every-four-year opportunity to make decisions about the direction of our country."