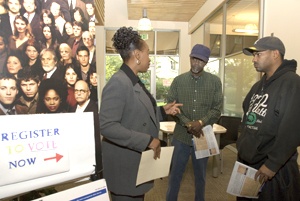 Rev. Renee Ward and her new organization, (I'm) Everyday People, have been working overtime to make sure local residents are registered to vote.
Now that the deadline for registration is over – Oct. 14 was the last day – the group is redoubling its efforts to make sure all those newly registered stay informed and actually cast their ballots.
When ballots are mailed out Saturday, Oct. 18, an entire roster of educational events and activities will be in place for voters all around North and Northeast Portland.
"You don't have to be anyone extra special to be involved in this effort, just everyday people, and everyday people can make a difference," Ward says.
"But in everyday people there's a wealth of resources, a wealth of value that people underestimate."
Ward says a whole roster of citizens are left out of policy-making, including "the homeless, the ex-felons, the people in recovery, seniors, and so on, students, in that order," she says. "And that's who everyday people are. These are the folks nobody goes and asks them for their opinion, and yet it affects them too."
For the past several weeks (I'm) Everyday People has hosted voter registration efforts weekdays at New Columbia. The group partnered with the Oregon Bus Project on a massive voter registration drive at the newly-opened Humboldt Gardens development.
The Humboldt project involved dozens of activist interns from around the country who worked under Ward's supervision in signing up voters in a complex where all the addresses were brand-new.
The (I'm) Everyday People voter campaign continues through Nov. 4 with a series of events, including film screenings with talkback sessions.
"One thing I know from when I was in college, one of the courses I took at UO was history of film, and one of the things we watched was propagandism being played out through the films, how to influence and create paranoia and fear among folks," Ward says. "I fast forwarded and said, look at this now, what's happening, because media is one of the most phenomenal things, and why Obama's become so successful was the technology and how the technology was used to get the word out."
Ward says she has taken care to work, in particular, with seniors and with youth.
"One of the focus has been on my elders," she said. "I've been working for awhile at Irvington Village, I have a nice rapport, I do a Bible study every Tuesday."
Further events are being organized at Irvington Village, including a possible children's forum bringing together elementary school kids to talk about their own political and social concerns.
"I listen to these kids, and they're very much conscious of what's going on," Ward, who has a 10-year-old son of her own, says. "We're making decisions for them – but they have a right to an opinion too about what's on their mind, what they want for their future."
Through Nov. 4, (I'm) Everyday People hosts a series of film screening events with refreshments, featuring topical movies with talkback sessions.
The films range from "The Autobiography of Miss Jane Pittman" to "Dr. Strangelove," and the right-wing propaganda film, "Who Is Barack Obama?"
"Media is just so important, these particular videos that are going be shown are just framing around a talk piece around what was happening then, and what can we do now to make sure that change will occur in the future," Ward says. "It's more importantly an effort to engage the community to vote."
For more information contact Rev. Ward at 503-548-7537 or email revreneeward@hotmail.com.