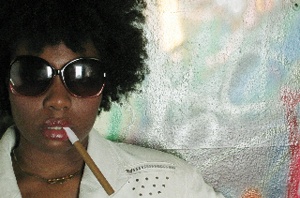 Gathering together some of the city's best talent, dirty girl productions presents "Hot Grits," Saturday, Oct. 24 and 25, Oct. 31 and Nov. 1, and Nov. 7 and 8, 7:30 p.m. at Re-bar, 1114 Howell St.
The play was written by V. Jude Hill, directed by Tyrone Brown of the Brownbox Theatre, conceived and produced by Denee McCloud.
"It's a concept band," McCloud says. The band itself is actually fictional; the women play and write their own songs and they play their own music, but they're within character.
"I call it a 3 a.m. idea," McCloud said. "A coworker and I had been talking about music and stuff for a week and one night I was just, like, we should start an all-Black female punk rock band, but make it a theatrical production, along the lines of Hedwig and the Angry Inch."
But, she says, the process for putting together the play was unique; the women in the band have been playing club shows for months in advance of the show, preparing for their roles as band members.
The crew started the project in June of 2007, planned for six months, then held auditions. "We cast women who did not know how to play their instruments," McCloud says. "They learned to play, and the rest is…"
All songs and music were written by the cast and produced by "dirty girl" productions. The cast includes Melany Bell, Taryn Dorsey, Rachael Ferguson and Nicole Peoples.
"Hot Grits is the result of an extraordinary team of artists and creators that have come together to wake Seattle up from a self-induced coma," said Denee McCloud, founder and producer dirty girl productions.
"It really was the result of a team of people, this could not have been done without the efforts of the creative team, the cast, our funders, volunteers, the producers, it really is a testament to what people can do when they get together and they're on the same wavelength."
The story follows the rise and fall of four Black women who dare to enter into the punk rock world where they are not necessarily welcome.
Lola, Jordan, Amber and Kenya find one another through a common love of punk rock music.
We take the journey with the girls as they gig throughout Seattle facing the uphill battle of trying to achieve notoriety, drug and alcohol addiction, sex, racism, sexism, love and their own self-perceptions and identities. We suffer through the painful and sadistic relationship between Lola and Jordan – a true rock and roll romance.
This raw foursome of gritty ladies are ready to burn all in their path. You have seen them around town, you read about them in the paper, so now come down to the Re-bar starting October 24th and get you some Hot Grits!
The show is ages 21 and over,  tickets are 15 at the door — no advanced tickets, cash only at the door.
"dirty girl productions" is a partner artist at the Shunpike, is dedicated to supporting modern and pioneering work produced by Black women. The Shunpike's mission is to strengthen the Seattle arts community by partnering with small and mid-size arts groups to develop the business tools they need to succeed.
For more info, email dirtygirlmarketing@gmail.com or visit www.myspace.com/dirtygirlprojects.