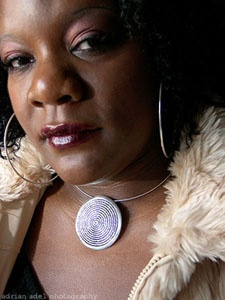 Poet Rochelle Hart has had a wonderful year. The articulate, self-described revolutionary poet is set to release a new spoken-word CD in December. She's shopping for a publisher for her recently-completed biography of a local music producer. She's set to earn her college degree and start a graduate program in psychology.
Plus, she's celebrating one year of marriage and the six-month birthday of her son, an experience she describes as "a whole new dimension of life."
Through it all, Hart – also known as Ro Deezy – is only gaining momentum as she continues to promote her most recent book of poems, "What Did You Think I Would Say? Poems About Politics, Passion, Resistance and Love."
One of only two Black winners of the Oregon Book Award, Hart's writing career started when she was a baby.
"Poetry is something I've always done," she says. "I literally asked my parents for a typewriter when I was 3 — I called it 'the machine,' because I didn't know what it was. "But my dad had one, he was a college student at the time, and I was fascinated by it. And thank god for parents that support their kids, on a whim — okay, she's 3, why does she want that? But who knew? So they got me one."
Born and raised in Northeast Portland, Hart attended Portland Public Schools and graduated from Madison High School, where she says her English teacher, Steven Musaeus, changed her life.
"I had his honors English class, but I was bored by what he was doing, and he saw that. So one day he came to me after class and said, okay, how do I make this work for you? So out of his own pocket he came back one day with a stack of books by Maya Angelou, Sonja Sanchez, Nikki Giovanni, and essentially designed me my own little curriculum within his course.
"And that was really my introduction to Maya who, years later, I would be fortunate enough to meet with personally in 1999 when she came here," Hart says.
Another critical influence on Hart's life was poet Savon Lindsay, who heard her spoken word poetry at an open mic when she was 19 and insisted she immediately publish them.
"He spent countless hours with me — I mean really grassroots — stapling the books together chapbook style, making sure I got it out there and showing me the ropes of how to do it and from there it just spiraled, people really liked it."
She had her first book release party at the Interstate Firehouse Cultural Center in December of 1998, and it sold out the first night.
Hart says today, she finds strength in relationships with her fellow poets and spoken word artists from the Portland area.
"Really on a day to day basis my heroes are people that do what I do, like Terrance Burton also known as Xavier Burton, Mike Crenshaw, Blacque Butterfly, OG One, there are tons of people out here really working on a grassroots level every day," Hart says. "Every day their lives are dedicated to making our communities better, and we don't make a lot of money doing it."
Hart says her current schedule is hectic and she hasn't been performing as much this year as she has in the past. But when she does get out at events, such as the Mississippi Jazz festival, her favorite poems come from her most recent volume, "What Did You Think I Would say?"
"I feel like it's my most mature work, if you will, and I think even with the political pieces that are in here which everybody knows me for, they're a little bit more bold, Hart says. "Which is saying something for me because I'm a pretty outspoken person."
Hart says another thing that sets "What Did You Think I Would Say?" apart from her past works is its background.
As she worked to complete it last year, Hart decided to Google her name on the Internet, to check the status of her publicity in other cities.
And she found some publicity – but not the kind she expected.
"I found an anti-Ro Deezy blog at a White supremacist website," she says. "So I clicked on it and it was literally a several-pages-long blog dedicated to anti-me, by this white supremacist group. And I mean they had everything from my Myspace page to the books I listed as my favorite  – and oh, I mean, a whole blog.
"And I thought – I must be doing something right," Hart says. "Apparently I am doing something right."
For more information on Hart's work, go to her website, www.rodeezy.com.