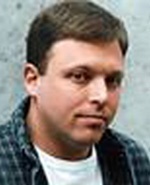 Tim Wise, among the most prominent anti-racist writers and activists in the country, lectures on "White Privilege: Racism, White Denial & the Costs of Inequality," Thursday, Oct. 16 at 11 a.m., at the Moriarty Arts and Humanities Building, Room 104, Cascade Campus, 705 N. Killingsworth St.
He also speaks about "Beyond Diversity: Challenging Racism in an Age of Backlash," Wednesday, Oct. 15 at 11 a.m. at the Performing Arts Center, Sylvania Campus, 12000 S.W. 49th Ave.
Wise is the author of "White Like Me: Reflections on Race from a Privileged Son," and "Affirmative Action: Racial Preference in Black and White." A collection of his essays, "Speaking Treason Fluently: Anti-Racist Reflections From an Angry White Male," will be published in the fall of 2008, and his fourth book, "Between Barack and a Hard Place: Race and Whiteness in the Age of Obama," will be released in spring 2009.
He has lectured in 48 states, and on more than 400 college campuses, including Harvard, Stanford, and the Law Schools at Yale and Columbia.
Wise received the 2001 British Diversity Award for best essay on race issues, and his writings have appeared in dozens of popular, professional and scholarly journals. Wise has been a guest on hundreds of radio and television programs, worldwide. He has also trained corporate, government, entertainment, military and law enforcement officials on methods for dismantling racism in their institutions.
Wise also speaks about "Profiles in Distortion: Misusing Data to Justify Racism and Privilege," at 9 a.m., Saturday, Oct. 18 at The Forum, Building 3, Rock Creek Campus, 17705 N.W. Springville Road.