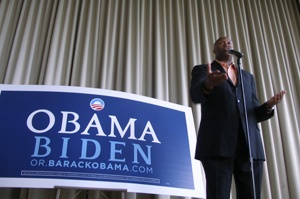 In this city, it's almost hard not to get registered to vote. Around almost every corner are volunteers with registration cards. But registering isn't enough, says Craig Robinson. You have to vote.
"I'd like to think Oregon is on lockdown," he said during a speech at PCC Cascade on Tuesday. "But the game's not over until the last buzzer goes off."
Robinson, who is head basketball coach at Oregon State University, and is Michelle Obama's brother, was speaking to encourage people to make sure everyone they know is registered.
You must register to vote by Oct. 14 in Oregon to vote in the Nov. 4 general election. You can verify that you are registered online at www.mcelections.org or by calling 503-988-3720. This election will allow you the voice in not only electing the president, but electing nearly every important position in the state. And the handful of ballot initiatives will affect everything from education funding to prison populations.
"The people who are coming out are more excited," said Sunshine Dixon, of the Urban League of Portland. "They sense the urgency, especially in the last few weeks."
Like many other organizations in Portland, the Urban League is doing their part to get people involved. On Saturday, Oct. 11, the Urban League is holding "Exercise Your Vote, Exercise Your Voice" at Concordia University. The event – held in conjunction with the Bus Project, NAACP and KBMS radio — will feature music from the No Kidding Choir, rapper Jabbok and others. The League is putting together canvassing teams to make a last minute push to register voters. To be a part of one of the teams, contact Dixon at [email protected] or call 503-280-2618.
In addition to the event, the League is engaged in teaching leadership classes and holding advocacy groups to get more people involved in the democratic process.
"People are more engaged than they have been in decades," said Midge Purcell of the Urban League. "Our community has been traditionally underrepresented and we're making sure everyone has an opportunity to have a voice. In this election, it's about people's housing, neighborhoods, jobs, and employment."
Also making waves on the state's election rolls is the Bus Project – a mostly volunteer organization started in 2001. The Bus Project helps mobilize voters, organize educational political forums and change the way youth organizing happens. So far this year, they've registered about 18,000 people – but many of the volunteers and campus organizations have yet to turn in their numbers. Mollie Ruskin, an organizer with the Building Votes program, says the Project is running into steep "competition" with the Portland Barack Obama campaign, which is waging a massive registration drive.
Another goal for the Bus Project has been to reach out to groups of people historically neglected on the voting rolls – low income, formerly incarcerated, homeless, and, perhaps surprisingly, young people. Ruskin says Portland's large population of 20-somethings are especially in need of attention because they tend to move a lot. And every time you move, you must change your address with the elections office.
"We've been targeting venues and areas where young people gather," she said. "A huge number of registrations come from updated addresses."
Ruskin and others, such as Sisters of The Road, have also been reaching out to the homeless and those with felony records. In Oregon, homeless people need to list a location they frequent and can pick up their ballot at the Multnomah County Elections office. And people with felonies have full voting rights once they are released from jail or prison. If someone is merely awaiting trial on a felony charge, they can register to vote by absentee ballot, although Ruskin says they have not been very successful communicating with the jails.
Another group working to enfranchise ex-offenders is The Partnership for Safety and Justice. The partnership is working to educate the public about how some of the new crime and education bills will affect the state. They are currently looking for volunteers to man phone banks through the last four weeks until the election. They will be hosting an Action Team House Party to talk about defeating Kevin Mannix's Measure 61, which will impose new mandatory minimums for first-time drug offenders, as well as some other crimes. For more information about the partnership, visit www.safetyandjustice.org.
Everyone involved in this election agrees on one thing – it is one of the most important elections in our lifetimes. Robinson says he's always worried about youth apathy, but this election cycle is changing something. According to the secretary of state's office, as of Tuesday, Oct. 14, there were 2,110,639 people registered in the state – only 31,000 away from the record set for the 2004 election. And we're still a week away from the deadline.
"I've voted in every single presidential election since I was 18," said Robinson. "Never have I seen so many young people who know the issues and who have vetted all the candidates."

Urban League's "Exercise Your Vote, Exercise Your Voice"
When: Saturday, Oct. 11; 3 to 6 p.m. (volunteers meet at 12:30 p.m.)
Where: Concordia University, 2811 NE Holman Street
What: To register voters, lift our voices in song and encourage the community to get out the vote. With the No Kidding Choir, 25th Hour band, rapper Jabbok, and others.
Register: Call Sunshine Dixon on 503 280 2618 to join one of the registration teams.

Trick or Vote
Canvassers will spread out on Halloween encouraging people to send in their ballots. This nationwide campaign is being organized through the Bus Project.
Register for Trick or Vote at www.busproject.org or for more info go to www.trickorvote.org.