Did O.j.'s Past Acquittal Play Role in Robbery Conviction? 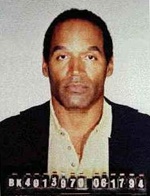 LAS VEGAS (AP) -- Jurors had been told to ignore what they knew about O.J. Simpson's past, but for many observers, the line connecting the former NFL star's murder acquittal last decade and his new conviction for robbing memorabilia peddlers couldn't have been clearer.
The attorney for the family of Ronald Goldman -- who was killed along with Simpson's ex-wife Nicole Brown Simpson in Los Angeles in 1994 -- said he thought his hounding of Simpson for years to collect a $33.5 million wrongful death judgment pushed him to a desperate gambit to recover personal items he had lost.
"We drove him into that room to grab the sports memorabilia before we could seize the stuff," said David Cook, who represents Goldman's father, Fred. "Going to jail for beating Fred Goldman out of footballs and family mementos. Is this closure for Fred Goldman? No. Is this closure for America? Yes."
Simpson lawyer Yale Galanter said Saturday, the day after Simpson and Clarence "C.J." Stewart were convicted of all 12 charges against them in the hotel room confrontation, that the Las Vegas jury was "on an agenda" to make up for Simpson's murder acquittal. The two face up to life in prison when their sentencing is handed down on Dec. 5.
"This was just payback," Galanter said.
"A lynching from the first second to the end," agreed Thomas Scotto, a close Simpson friend who testified and was overcome by emotion in the courtroom after the verdicts were read. "It's a total injustice."
Scotto later told reporters he would remain in Las Vegas to seek out witnesses and show they were forced into their testimony.
"I need these witnesses to come forward and start telling the truth," he said.
The case against Simpson was won the moment the jury was chosen, according to the consultant who helped prosecutors pick the panel.
"That was the best possible jury prosecutors could ever have," said Howard Varinsky, who drafted a questionnaire for the prosecution that formed the basis of a survey used to cull 12 jurors and six alternates from a pool of 500 prospects.
"I was surprised that we got all the counts," he said Saturday. "But it wasn't an accident that the jury wound up looking like that."
Whatever the jury was thinking, Fred Goldman praised the verdict.
"We're absolutely thrilled to see the potential that he could serve the rest of his life in jail where the scumbag belongs," he told CNN.
Brown Simpson's relatives said in a statement that they want to be left alone as they "work through many mixed emotions." They said they are primarily concerned about the children from the marriage, Sydney and Justin.
The jury that convicted Simpson consisted of three men and nine women, including one woman who identified herself as Hispanic, a court spokesman said. The jury contained no Blacks, the race of both defendants.
Jurors declined interviews and avoided the media after the verdicts were read.
According to jury questionnaires released Saturday, five of the 12 jurors wrote that they disagreed with the 1995 verdict that cleared Simpson of murder. Most others claimed to be uncertain or did not answer the question.
Redacted versions of the questionnaires were made public by Clark County District Judge Jackie Glass after The Associated Press and Stephens Media LLC, owner of the Las Vegas Review-Journal, petitioned for their release.
Prosecutors have declined to comment throughout the trial.
Lawyers and jury analysts recalled that prosecutors succeeded in removing two Black jurors from the final panel.
Varinsky insisted that Simpson and Stewart got fair trials, saying jurors answered several questions attesting to their ability to set aside their feelings about the Los Angeles case.
But he acknowledged the questions also reminded jurors about that case.