Afro-Cuban Dance at the Library 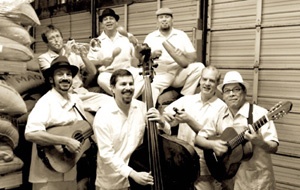 Los SuperSones Trio will perform traditional Cuban dance music at "The Sounds of Cuba: Afro-Cuban Folklore in the Countryside to Salsa in the City" from 3  to 4 p.m. Saturday, Oct. 11 at The Seattle Public Library, South Park Branch, 8604 Eighth Ave. S.
The program is free and open to the public. No registration is required. Limited free parking is available at the branch.
SuperSones play the music known as Son - acoustic dance music of the Cuban countryside that inspired modern Salsa. Son is a unique blend of Spanish guitars and harmony, Afro-Cuban percussion and swing, call-and-response singing, and trumpet improvisation.
The group plays a wide range of classic and original songs in the many genres within the Son family: bolero, cha cha cha, guaracha, and son montuno among others. The group plays songs written by some of the greatest composers of Cuban popular music including Compay Segundo, Miguel Matamoros, Isaac Oviedo, and Arsenio Rodriguez.
SuperSones perform the music with their own arrangements and improvisations unique in the Pacific Northwest. The group also regularly features original compositions firmly rooted in the Son tradition.
In "Sounds of Cuba," Los SuperSones Trio tells the story of the development of many styles of traditional Cuban dance music.
The group narrates stories and plays Cuban instruments to trace the growth of music in eastern Cuba and its migration to Havana and the rest of the world.
They use maps and other visual guides to help the audience learn about Cuban geography and its relationship to Europe, Africa and the Americas.
During the program, the audience will be invited to participate by singing, answering questions, clapping and playing instruments.
Los SuperSones Trio has performed at many venues in Seattle and has taught workshops and performed at several schools.
The group is comprised of musicians Ron Barrow, Kevin Connor, Justin Maggart, Alfredo Polier, Steve Smith, Kevin Stevens and David Trejo.
For more information, call the branch at 206-615-1688.