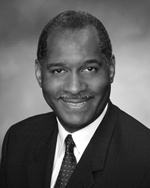 The Metro Council last week voted to reappoint Ellis "Ray" Leary to serve a second term on the Metropolitan Exposition Recreation Commission.
Leary was nominated by the City of Portland as its representative on the regional Metro commission overseeing the Oregon Convention Center, Portland Expo Center and Portland Center for the Performing Arts.
In his first term as MERC Commissioner, Leary worked to expand business and economic development opportunities, such as the Oregon Convention Center Headquarter Hotel, and played a key role in shaping the vision and strategic planning of the Commission.
"Ray's leadership in the Portland business community has proved invaluable to the MERC Commission," said Don Trotter, MERC Commission Chair. "I am thrilled that he will be continuing his service to the community as a MERC Commissioner."
Leary is the principal officer of Portland-based ERL, LLC, a local firm specializing in urban real estate development, marketing, workforce development and training.
As former manager of the ADIDAS America's national urban marketing unit, he played a crucial role in opening the company's first full-line retail store in the United States located at N.E. Martin Luther King, Jr. Boulevard and N.E. Alberta Street in Portland.
He co-directed Self Enhancement Inc., a nationally-recognized youth empowerment program in North/Northeast Portland, and led the capital campaign to build its $10 million youth facility.
Leary also served as director of development and, temporarily, as interim president of the Urban League of Portland.
Heis a Portland native and graduate of Jefferson High School and San Diego State University. He was first appointed to the MERC Commission in 2004 and his new term will expire in 2012.
"The economic and cultural opportunities facing the region are constantly changing and the future we face is even more challenging," Leary said in a statement. "I look forward to continuing this important work for MERC and our region."
MERC is a service of Metro and manages the Portland Center for Performing Arts, Oregon Convention Center and Portland Expo Center. It serves as a catalyst and advocate for community, culture and economic development. Visit www.mercvenues.org for more information.