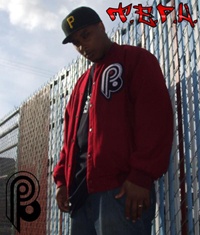 About four years ago, Antwaun Spencer faced a difficult proposition: tell the truth and risk alienation from friends, or spend the next 12 years in prison for something he didn't do. The code of the street is strong, but Spencer's desire to turn his life around was stronger.
"Before I got saved I was living that other life," Spencer told The Skanner. "Pimping and selling drugs and packing guns."
He was also rapping about what he was doing, performing in clubs and at parties, but he wanted out. Sitting in prison, facing the nearly same set of circumstances that sent his father to prison for life, Spencer knew he had to change.
"It was weighing down my life," he said of his former lifestyle. "My father was in jail my whole life, my mom was strung out on crack cocaine, I was raised in foster care. It was in my blood. It was something I fell into."
And then he fell out. He told the cops the truth that they knew all along, he embraced Christianity and he started making music about his new life under the pseudonym T.E.P.H. – Teacher. Entertainer. Prophet. Humble. — with the Portland-based production company PO Soul Entertainment. His first album, "Tried As An Adult," will be released on Oct. 3 at the Corridor Club in Seattle. While it's decidedly a Christian album, Spencer says it appeals to anyone looking for a positive message.
"I want this album to bring a sense of popularity to the notion of being a square," he says. "Working a legal job, settling down with one woman. If we can bring popularity to that, then it's OK to do the right thing, its OK not to fight, and you can be cool not doing it. You can be a square and still be fly."
With brand new Ray Bans, a stylish, red jacket and jeans, Spencer isn't your typical 25-year-old ordained minister. Style is important to him, as is dressing to his audience. When he is working as church elder, he's wearing a suit. When he's out in the neighborhood or performing, he wears what he calls "urban corporate."
"I can relate to urban but at same time, dress up and speak the lingo of the corporate," he said. "It's a good repertoire to have. You can be diverse and relate to a lot of people."
But Spencer isn't your typical up and coming local artist. He's already getting a lot of attention from the music industry. He received Inside the Music's Best New Artist award this year – despite not having yet released his first album. He said he was also offered a larger recording contract, a contract he turned down.
Jermaine Atherton, Spencer's representative with PO Soul, says he has a lot of confidence in the music to reach people that may not normally listen to Christian rap. PO Soul, a non-denominational record company/ministry, is celebrating its five year anniversary in December.
"The music is the bait to get the folks to hear the message, but we're really a ministry," Atherton said. "We're doing neighborhood cleanups, sponsoring kids for families for Christmas, school supply drives … it's more of a ministry than a music company."
There are currently six artists and DJs signed with PO Soul – Asa, the company's CEO; TEPH (Antwaun Spencer), Angel, DJ Duce 4, and DJ Big Rigga and Cicero.
But even if Spencer's dreams of bringing his message to the national stage don't materialize, he has a backup plan. He's currently attending Concordia University studying for a degree in theology and business.
In addition to his Oct. 3 CD release party at Club Corridor, 2819 S. 208th St., TEPH will have his Portland CD release party at New Paradise Worship Center, 4100 SE 182nd Ave. Gresham, and an artist meet and greet at Traiel's Food 4 the Soul, 300 N. Killingsworth St. from 2- 6 p.m.
You can listen to TEPH's music at www.myspace.com /tephposoul or visit www.posoul-entertainment. com for more information about PO Soul Entertainment.