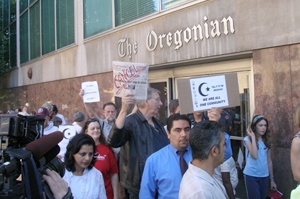 A crowd of about 50 gathered in front of the Oregonian offices Monday to protest the distribution of a DVD that they say unfairly criticized Muslims. The DVD – a paid advertisement in The Sunday Oregonian – is titled "Obsession: Radical Islam's War Against the West" and the Oregonian's Publisher Fred Stickle said they were following normal advertising guidelines. The protestors and many others, call it hate speech.

"This is not about rights," says Promise King, executive director of the Oregon League of Minority Voters, regarding the DVD "Obsession: Radical Islam's War Against the West," about Muslim Extremism that was included in certain subscriptions of The Sunday Oregonian Newspaper. "You can't say it's free speech when you're throwing a bomb."

Some of the protestors spoke loud and clear – they perceived the DVD as a message of hate during a deeply contested election season, especially in one where the Democratic candidate Barack Obama has been smeared in rumors as being a Muslim. He is a Christian.

"What they have done is against the values of Muslims," said Kayse Jama, the executive director of the Center for Intercultural Organizing, which helped to organize the protest. "What this DVD is is not free speech. It's pure hatred and violence. They are creating fire and distrust among our community. This is not acceptable."

Even those outside the traditional circle of Islam were lending their support to the rally. Stephen Ying, president of the Chinese American Citizen Alliance, says he fears similar groups publishing inflammatory and hateful propaganda about Chinese Americans.

"If they did it for Muslims, they could do it for us," he said.

In protest, Jama says he encourages everyone who disagrees with the Oregonians decision to engage in a bit of individual protest – mail "Obsession" back to the Oregonian.