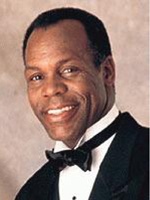 TULSA, Okla. (AP)  Actor Danny Glover warned Friday that other American Indian tribes will follow the example of the Cherokee Nation if it succeeds in blocking tribal citizenship for freedmen descendants.
Speaking at a forum hosted by members of the Congressional Black Caucus, Glover called on the Cherokee Nation of Oklahoma to allow freedmen descendants into the tribe with full citizenship rights, the Tulsa World reported from its Washington bureau.
A March 2007 vote by Cherokee Nation voters to remove freedmen descendants from tribal rolls has been challenged in court. Freedmen are descendants of former slaves owned by the Cherokee Nation.
Glover described the relationship linking American Indians and black people as one of the most pivotal in the nation's evolution.
"I've always embraced that relationship,'' he said. "My own grandmother was part Choctaw.''
He cited the history of black people who escaped their captors and found refuge among the Indian tribes, as well as the strategic help black people offered the Seminoles in their war against the tyranny of the colonies.
Both groups, Glover said, have seen genocide and exploitation.
"But I am disturbed by what I see,'' he said, calling on black people to serve as the moral compass on such issues as the freedmen descendants quest to have full citizenship rights in the Cherokee Nation.
"These are very important decisions that we have to make. They are moral decisions.''
Glover later said he has been interested in issues involving black people and American Indians for some time and tries to express that both in his work as an actor and as a private person.
"It is a relationship that we don't have a great deal of discussion about,'' he said, adding that his own culture encouraged him to deny it.
Cherokee Nation Principal Chief Chad Smith also gave a hallway interview as the forum took place. Smith said he had asked to be included in the forum's panel but was turned down.
"That may be the heart of the problem,'' he said, calling for all parties to have an open dialogue about the lengthy and complicated history.
Smith welcomed Glover's participation. "My response to him is, 'Give me 15 minutes of your time. Let me show you our side of the story,''' he said. "And, I think he will agree with us that it is a complicated issue and the courts should decide.''
The tribe won a legislative victory this week when a provision designed to deny housing benefits to Cherokees until the tribe recognizes freedmen descendants as citizens was altered.
The latest version of the bill allows the tribe to receive those benefits as long as a tribal court order on the matter remains in place as the case continues.
The Tahlequah-based Cherokee Nation one of the largest Indian tribes in the United States, with about 250,000 members.