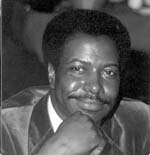 Lawrence Lowe died on Sept. 12. He was 65. was born July 22, 1943, in Warren, Ark. to Sam and Dorris Lowe. He was the fifth child of 12 children.
Their family moved to Portland, Oregon when Lawrence was a baby. He attended Boise Elementary School and graduated from Jefferson High School in 1962.
He worked for Tektronix in Beaverton from 1966 to 1999 as a Reprographics CAD Drafter and had other various jobs.
Lawrence loved to travel to different cities and he loved going to the Oregon Coast. He was blessed with a beautiful natural voice and singing was one of his many passions. He sang in the school choir while attending Boise Elementary School and all four years at Jefferson High School. He also sang in several doo-wop groups in his youth.
Coaching youth baseball and basketball was another passion of his and he coached for many years. He taught them how to play the game and the importance of sportsmanship. He loved family and friends' gatherings. No matter the occasion, whether it was a birthday party, the family's annual Superbowl party, 4th of July, or barbecuing, he enjoyed time with family and friends.
He was a hard-working man who sometimes worked two part-time jobs while working a full time job. If anyone needed help, he would volunteer his services instantly, no matter if the job consisted of moving one piece of furniture of a whole house of furniture. He was a good person and a good man.
His family and friends will miss him dearly.
Preceeding him in death was his father and mother; brothers William Spencer, Henry Lowe and Jessie Lowe; and granddaughter Andrea N. Butler.
He leaves behind three children: Angela Lowe of Los Angeles, Troy Lowe of Portland and Nina Roberts of Scottsdale, Ariz.; eight grandchildren: Crystal Butler, Lawren Roberts, Justin Roberts, Kasandra Roberts, Aaron Fitts, Brandon Lowe, Nathan Roberts and Keith Roberts; eight siblings: Wesley A. Lowe, Sammuel Lowe, Lee Edwards, Edward D. Lowe, Robert L. Lowe, Patsy A. Griffin, Doris J. Lowe, Kenneth R. Lowe and Shirley L. Lowe all of Portland, Oregon; and a host of cousins, nieces and nephews.
Arrangements By Cox & Cox Funeral Chapel.