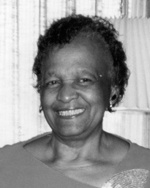 Josephine "Jo" Jenkins has died. She was 83. Jo was born May 23, 1925 to KC & Mary Virgil in Marigold, Miss. She was the younger of two children who attended school in Mississippi. In the early 1940s, during the war, Jo and her family moved to Portland so her parents could obtain employment in the shipyards. This was when she met a young military gentleman at the USO named Willie B. Jenkins. Shortly thereafter, they were united in marriage.
Jo retired from Emanuel Hospital where she worked in the surgery department as a surgeon's assistant. She was known affectionately by her colleagues for her beautiful, warm smile that she wore to work every day. She was a loyal friend and her treatment of others made a lasting impression. Those that knew her knew that when she said something, she meant it and we were always surprised to know that she was listening and would come out with some words of wisdom. She enjoyed each and every grandchild and always kept tabs on what they were doing. She loved sports and watched all the basketball, baseball and football playoffs and she definitely had her favorite teams.
Josephine was preceded in death by her husband, mother and father. She is survived by her sister, Nettie Friday of Los Angeles; her children, Dorothy Dawson, Earline Penson, Willie B. Jr., Yvonne, Don, Joanne, Carol, Carl, Dwayne, Terrell Jenkins and step-daughter, LaTonya; 19 grandchildren; 11 great-grandchildren; nieces Shirley Davis, Joyce Johnson, Lisa Johnson of Los Angeles; nephew, Lee Johnson; and a host of nieces and nephews on the Jenkins side of the family from Chicago. In addition, Ancer Hagerty and Mary Jo Henderson adopted Jo as their surrogate mother after the passing of their own mother.
A service will be Friday, Sept. 26 at New Hope Missionary Baptist Church  3725 N. Gantenbein
Arrangements By Cox & Cox Funeral Chapel.