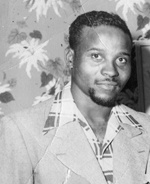 William Milton Bentley, Sr., died on Sept. 17. He was 88. William was born on Sept. 11, 1924 to Bee Bentley, Sr. and Underee (Howell) Bentley in Stephenville, Texas.
William, called (Bill) by friends and relatives, finished school in Stephenville before joining the U.S. Army in 1943. He fought battles in Normandy, Northern France, Ardennes, Rhineland and Central Europe. Bill qualified as a Rifle marksman on June 27, 1943. He was decorated with five bronze stars and three overseas bars. During his tour of duty, Bill was also champion in the heavyweight division of the United States Army.
Bill returned to Texas and married Clara B. Lewis on Aug. 18, 1945.
The Bentley family returned to Portland in 1957, which was the location where he was discharged from the Army.
Bill moved to Denver, Col. in 1961. While living in Colorado he joined King Baptist Church and became a member of the Deacon Board, sung in the Adult Choir and taught the Sunday school until leaving Colorado in December of 1999.
He loved to sing gospel songs, read and discuss the Bible. Bill also spent the majority of his time hunting, fishing, playing bid whist and dominoes (bones), which he loved to do with his friends and family.
William Sr., was preceded in death by both his parents and nine siblings.
He is survived by his wife Clara B. Bentley of Portland; sister Odell Phillips of Stephenville, Texas; sons Wayne Bentley and William and wife Donna Bentley; daughters Barbara Bentley, Patricia and husband Willis Jean Beasley, Lois and husband Solen Williams of Las Vegas, Erma and husband Otis Johnson, Valerie Bentley and Delores (Gary) Clark; 24 grandchildren; numerous great-grand children; nephews: Howard Phillips of Stephenville, Texas, Fredrick Bentley, Jr. of Los Angeles; niece Sandra Smith of Los Angeles; and a host of loved ones and friends.
A service was held on Sept. 24 at Corner Stone C.O.G.I.C.
Arrangements Entrusted By Cox & Cox Funeral Chapel.