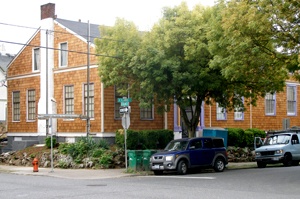 A year ago this September, the outside of the Billy Webb Elks Lodge looked a lot like it had for the last several decades — rundown. But times change, and the old Elks Lodge is changing with it.
The windows are no longer covered with large sheets of plywood; the roof is no longer leaking water nine months out of the year; the weather-worn siding has been replaced; and other work is on the way.
The lodge, 6 N. Tillamook St. off Williams Avenue, is home to Portland's only remaining African American Fraternal Organization.
Last September, Wanda Broadous began holding a series of concerts, dances and other events to raise money for the building's improvements. There was some uncertainty if the community would support the building's – and the chapter's – revival. That uncertainty has been replaced with the goodwill of a community not willing to see the 1920s-era building gone.
"Kaleidoscope put the roof on the building almost free of charge," said James Posey, owner of Work Horse construction. "This is a phenomenal thing – I haven't seen this happen anywhere."
Organized primarily by CJ Jackson Construction, a number of contractors and other partners have donated their time, expertise and materials to help revitalize the Elks' headquarters. They will be holding volunteer days at the lodge on weekends in October from 7 a.m. to 4:30 p.m. Block parties will be held on Oct. 5 and 12.
"We need more volunteers to come in," said Calvin Jackson, owner of CJ Jackson Construction. "Good food on the weekend. We appreciate anybody to come out and finish up this historic building."
While the majority of the outside work is complete, the inside of the lodge still needs work. And it might even give contractors the opportunity to network with other companies, including O'Neill Electric, Hoffman, Stacey Witbeck General Engineering and many others, including many National Association of Minority Entrepreneurs members.
"It has a profound history and people have an emotional attachment to this building," Posey said. "For folks to come out and help with this building is part of our bringing this community back to where it should be."