The Publisher of The Skanner
Published: 22 September 2008

Many people look down on construction workers. In fact experts predict the shortage of construction workers will worsen over the next decade unless steps are taken to reverse the trend.
Ironically, the Pacific Northwest is in the midst of a golden age of urban expansion. In Seattle and Portland, billions of dollars has been spent on the reconstruction of city centers and housing communities over the past 10 years.
The next decade will see a major reinvestment in infrastructure projects such as the Brightwater Sewer Project in Seattle, the interstate bridge connecting Oregon and Washington. In Portland, Emanuel Hospital just broke ground on a new children's hospital and the Port of Portland is already raising dust with a gigantic new headquarters complex next to the airport.
In this 2008 Minority Business Enterprise special issue, The Skanner examines the skyrocketing business of construction contracting – one of the few areas where entrepreneurs have the power to generate family-wage jobs for others, while leaving a bricks-and-mortar legacy of their efforts for the world to see. 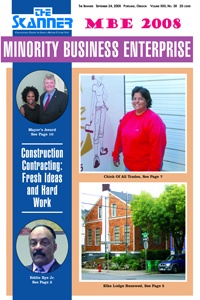 Sadly, while Portland's contracting scene is blossoming with hard-fought opportunities for women and workers of color, Seattle-area contractors are still laboring to educate elected officials and giant corporations on the win-win benefits of a level playing field.
On Sept. 11, Sen. John Kerry presided over hearings in Washington D.C. called "Business Start-up Hurdles in Underserved Communities: Access to Venture Capital and Entrepreneurship Training."
Kerry cited statistics showing that African Americans make up over 12 percent of the national population, but under 6 percent of businesses and 1 percent of profits earned; women comprise a majority of the population, but account for less than 30 percent of businesses and just over 10 percent of profits.
"These statistics are disappointing and troubling," Kerry said. "But they're certainly not due to any lack of motivation or determination on behalf of minorities and women. Instead, they're due to the tremendous hurdles women and minorities must face each day to gain fair and adequate access to venture capital, credit and business and technical training."
With this issue, The Skanner aims to energize industry and government to direct more opportunities toward the underserved in our local communities. We hope that by shining a light on the fresh ideas and hard work of those who've made progress can help resolve the battles still underway.