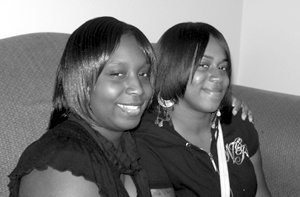 Kasaundra and Ayesha Lomax, the two oldest daughters of Hamedah Hasan, who has been incarcerated since 1993 on a nonviolent, drug-related charge.

In 1993, Hamedah Hassan was sentenced to live the rest of her life in a federal penitentiary. Hassan – then known as Stephanie Lomax -- didn't rape, murder or kidnap anyone.
Her crime? She was marginally involved in her cousin's crack cocaine business. She babysat the kids, ran small errands and occasionally wired money for him – she says she never touched the drugs.
But that didn't stop prosecutors from charging her with Conspiracy to Distribute Crack Cocaine, a charge they knew yielded a mandatory minimum sentence of life without the possibility of parole. It was a virtual death sentence for the 26-year-old pregnant woman and mother of two.
Hassan's ordeal is outlined in the documentary film "Perversion of Justice" by the Rev. Melissa Mummert, which played last week during a revival of the Portland Women's Film Festival.
Hassan, a mother of three daughters, is serving time in a federal prison in Victorville, Calif, but before her life became entangled in the largest criminal system in the world, Hassan was like a lot of struggling women -- she was in a violent relationship with the father of one of her children and she was looking for a way out.
Her escape led her to the home of her cousin, who lived in Nebraska. She knew her cousin dealt drugs, but she didn't concern herself with it, occasionally doing errands for a man she describes in the film as being as close to her as a brother.
She never delivered drugs, but she made wire transfers for him. Federal Authorities arrested her about a year later, after she'd moved back to Oregon and was enrolled in a welfare-to-work program. Her cousin's arrest involved an incident of which she had no knowledge or involvement. Nonetheless, when she refused to "cooperate" with authorities and testify against a man she loved, Hassan rejected the 10-year plea deal and took a gamble on a trial. She lost.

Hassan's sentence is not unique. Hundreds of thousands of women and men – an estimated 60 percent of the federal prison population -- are behind bars on federal mandatory minimum drug charges, often serving sentences that mirror those handed down to the leaders of drug cartels -- sometimes longer.
Two of her daughters, Kasaundra and Ayesha, were ages 9 and 4 when Hasan was arrested. Hassan's youngest, Kamyra, now 14, was born in prison shortly after Hasan was convicted.
Despite great odds, the family has persevered. Kasaundra and Ayesha, who both have daughters of their own, are working in the health care field in Portland. Kamyra is getting good grades and living with her grandparents. But not everything is well. The pain of not having their mother is just beneath the surface.
"I cry about it. I just hurts a lot," Ayesha said. "I know she doesn't deserve to be there. It does bother me a lot. I don't really know a day that goes by that it doesn't upset me."
Kasaundra deals with it differently. She tries not to think about it, but it has changed the way she looks at justice in America.
"I just call it the unjust (system)," she said. "There's no justice and not just with my mom, when you go to other states and hear from other family members or even our neighborhood friends and family, there's a lot of unjustice."
Both Kasaundra and Ayesha have traveled to New York and Washington, D.C. to speak out against the mandatory minimum sentencing structures that have put a single mother in prison for a first-time, non-violent drug-related offense for half her life.
Kasaundra even met Eric Sterling, the former counsel to the House of Representatives Committee on the Judiciary who helped write mandatory minimum laws. The encounter, partly recorded in the movie, surprised Kasaundra.
"I was kind of angry with him," she said. "I didn't want to talk to him. I should've asked him, 'what are you doing to fix this?'"

Sterling is actually doing a lot to fix what he helped to create. He helped to found some of the most powerful groups lobbying to end various aspects of drug prohibition – Families Against Mandatory Minimums, Forfeiture Endangers American Rights, the Marijuana Policy Project and serves on the boards of Partnership for Responsible Drug Information, Students for Sensible Drug Policy and Law Enforcement Against Prohibition.
But the growing number of people in support of drug policy reform provides only a slight glimmer of hope for the women – having their mother out of prison is their main hope.
"It's discouraging when her clemency request is denied," Kasaundra said. "When it comes down to like, now, when we're waiting for an answer from a judge. She did her time, I believe."


Hasan's latest effort for a reduction in sentence is a motion based on the U.S. Sentencing Commission's decision to make retroactive a decision to make some mandatory minimums merely advisory. The U.S. Supreme Court said judges could impose shorter sentences for crack cocaine citing the massive disparity between crack and powder cocaine sentences.
Previously, a person with one gram of crack cocaine received the same sentence as someone with 100 grams of powder cocaine, despite the fact that the powder is more pure and they are chemically identical.
Mummert says the weight of drugs that Hasan's cousin was arrested with is also in dispute, which was mentioned when U.S. District Judge Richard Kopf reduced her sentence to 12 years after an appeal. That appeal was overturned by a higher court after prosecutors appealed the appeal.
Kopf has since withdrawn himself from Hasan's case, saying he was too emotionally involved to hand down an impartial decision. In the film, Kopf said sentencing the mother of three to the rest of her life in prison "felt awful."
Mummert, who now operates the Empowering Kids with Incarcerated Parents program at a nonprofit in Charlotte, N.C., says she has mixed feelings about the drug policy reform movement.
"A lot of people in drug policy reform movement don't have a clear picture of how bad drugs can be," she said. "I hate crack cocaine. … but, you can't stop people from using it by throwing them into prison. It's a public health problem."
Treatment needs to be available on demand; people who are committing crimes to support their habits need to be locked up; and Mummert says she wants to know why some of the good classes available to inmates serving 30 years aren't available on the outside. She's dismayed by a punitive system that has no regard for people who have changed – as many of us do over time.
"That's what's so sad," she said. "Some women are sociopathic and lost. But some, the light bulb went on … but they're still facing 30 years."

During her time, Hasan has taken many classes in her federal prison in Victorville, Calif. She's prepared to be a paralegal and is allowed regular phone and Internet contact with her family.
"We talk to her and know her like she's here," says Ayesha, who talks to her mom nearly every day. Letters and gifts of prison-made pottery and other arts and craft projects are fairly regular.
"We don't take (our mother) for granted," Kasaundra says. "She created that, she wouldn't let us not be close. She could've gone there and been bitter and done with it and let our grandparents raise us. But she didn't. She's so involved. It's just like she was sitting right there. She was creating bed times from there. She was a good parent."
But it's no replacement for a live-in mom. Fourteen-year-old Kamyra is experiencing the same kind of experience that Kasaundra and Ayesha did. Except for Kamyra, the only memories of her mother are the yearly visits to Victorville – a city that's 1,000 miles away from their home.
"I can look at her and see she's upset about something," Kasaundra says. "We can sit and laugh about the old times, she can't."
But the family is all hopeful that Hamedah Hasan will come home to live with them very soon. Even if her latest motion is denied, she is set to be released in 2016.
"Her big dream is for us all to come and have a house together," Kasaundra says.
But she doesn't want to wait to 2016 to see her mother again. She wants to know why our government continues to have policies that destroy families worse than drugs do.
"It's very heartless and cold. Just because they're inmates doesn't mean that they're worthless, they should take the time, 'cause not everyone is guilty," Kasaundra says. "And there's such a thing as time served and your time is done, and her time is to be here. They should pay attention to that too. Anything is better than 2016. Then I try to look on the bright side. It's 2008, it's a lot closer than 1993 was. Time is only moving forward."
"It's not coming quick enough for me," says Ayesha.

Visit www.perversionofjustice.com for more information about Hamedah Hassan's case and filmmaker Melissa Mummert. On the website, you can find links to several organizations working to change current drug laws.