By The Skanner News
Published: 17 September 2008 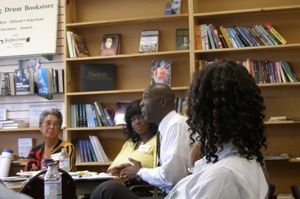 The African American Tobacco Prevention and Education Network met with a number of health professionals and church leaders on Tuesday to advance the cause of smoking cessation. Pictured is Dr. James Mason of Providence Hospital, who told the group about his employer's anti-tobacco efforts.
Yugen Rashad, the network's program coordinator for LifeWorks NW, led the group in discussing ways these two communities could reduce the number of smokers, tobacco sellers and help prompt bars and restaurants to go smoke-free before the new state anti-smoking law goes into effect.
While no bar or restaurant owners were present for the meeting, Rashad said they plan to meet face to face as their next plan of action to reduce smoking. They want to talk those business owners into restricting smoking before the indoor smoking ban goes into effect in January.
Dr. Mason said his company made the choice to go tobacco free as a way to reduce their bills on insurance premiums and improve the health of their employees and patrons. They're taking non-punitive steps to remind people that tobacco use is not allowed, being careful by "not throwing smokers under the bus."
The county will be taking a much more punitive approach when the new indoor smoking ban goes into effect in January 2009, issuing fines to any bar or restaurant allowing smoking indoors.
During the meeting, Moe Spencer, the state director of government relations for the American Cancer Society, expressed his support for the LifeWorks program and said the ACS would lend its hand in getting out the message of support.
Many in the group, including health workers, pastors, church leaders, county health workers, expressed a need to change the culture of smoking.
"In the community, you have certain things that are non-negotiable," said Kevin Howard of Highland Christian Center. Howard wanted to see smoking go the way of swearing – not to be done in mixed company.
Kylie Meiner with the Department of Human Services, says there are also several pieces of state legislation moving forward that impact smoking and cigarette sales.