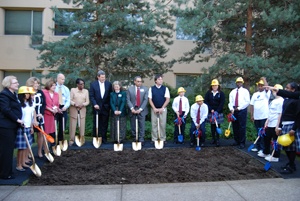 PCC Open House
Portland Community College's Cascade Campus holds an open house  Friday, Sept. 19, from 3 to 7 p.m. It will give members of the community the opportunity to tour the North Portland campus, have a bite to eat, and get a firsthand look at all that Cascade has to offer.
The event at Cascade, 705 N. Killingsworth St., features a barbecue meal at 4 p.m. in the Borthwick Mall (while supplies last), music, games, activities and a range of information on the campus' academic offerings, clubs and services.
Attendees will have a chance to apply on the spot for fall term admission, which begins on Monday, Sept. 22. Special guests, state Reps. Tina Kotek and Chip Shields will be on hand to greet visitors.
A student outreach squad will lead tours of the campus throughout the day, which will feature exhibits and demonstrations from many of the campus' academic programs. Visitors will have the chance to experience the campus' state-of-the-art multimedia lab, see its emergency services training facilities – where Portland's next generation of police officers, firefighters, paramedics, emergency medical technicians, 9-1-1 operators, and emergency managers learn their trades – and view the art gallery, to name a few.
For more information go to www.pcc.edu .

Film Screening on Drug War's Victims
In America, millions of people are arrested every year for non-violent drug offenses. And since 1986, hundreds of thousands of Black people are sentenced to die or spend decades in prison for crack cocaine – some of whom who had no contact at all with the drug. Filmmaker Melissa Mummert tells the story of one mother who was sentenced to two life sentences without the possibility of parole for a first-time, non-violent drug offense in "Perversion of Justice." The film, winner of the Changemaker Award, will be shown as part of the Best of POW Festival at 8 p.m. on Thursday, Sept. 18 at Whitsell Auditorium at the Portland Art Museum.
Hamedah Hasan was convicted in 1993 for drug conspiracy because she lived with a cousin who was selling cocaine. Hasan did small favors for her family – she watched children, helped pay the bills and never handled or delivered drugs. The judge – a George H.W. Bush appointee – who was forced to hand down the sentence called it "the most grotesque perversion of justice I can think of." Her three daughters reside in Portland, Ore. Hasan is serving a 27-year sentence in a California penitentiary.

Demos Forfeit Grant Game
Jefferson High School was forced to forfeit their first win of the football season and has been issued a fine of $100 by the Oregon School Activities Association for allowing two ineligible players on the field. The Demos had beaten Grant High School 36-28 in their season opener.
According to Matt Shelby, Portland Public spokesman, newly appointed athletic director Mitch Whitehurst didn't know the two students were ineligible. They both attended POIC (Portland Opportunities Industrialization Center) High School and their grades were not immediately available to coaches.
From now on, Whitehurst will be approving all non-Jefferson students for play and will require written verification before allowing anyone on the field.
Any student living in a high school's neighborhood is eligible to play for the school – even students in homeschooling. Players must maintain a 2.0 grade point average to be eligible.