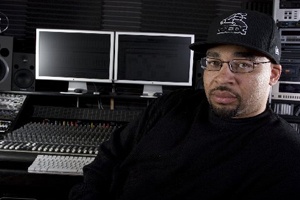 In October, Portland's urban airwaves will sound a lot more like the Northwest. Local Hip Hop impresario Cool Nutz is teaming up with the new Jammin' 107.5 FM and a cadre of local artists for the upcoming Northwest Breakout Show. Featuring quality and upcoming regional artists from Oregon, Washington and Northern California, Cool Nutz – aka Terrance Scott — will interview artists on the air, bring in national talent for constructive criticism, host live events and even release mixed tapes.
"This is completely from scratch," Cool Nutz told The Skanner. "You have a lot of artists doing a lot of positive things here. … It just doesn't get the exposure."
The Northwest Breakout Show – which premieres Friday, Oct. 3 from 9 to 10 p.m. on Jammin' 107.5 FM – comes after Cool Nutz's run as a producer on KBOO radio. No stranger to Portland's music scene, Cool Nutz has released 18 albums from a variety of artists since 1992 under his label, Jus Family Records. He also recently released several albums of his own – "Every Single Day" with Luni Coleone and "King Cool Nutz."
The show comes at time when there aren't many mainstream ways for local rappers to be heard. Outside of KBOO and the new Jammin', other radio stations that play hip hop only play corporate-approved song lists, effectively censoring local talent that hasn't been recognized nationally. But by promoting a local act alongside a national act, Cool Nutz hopes to get names – and albums – out into the hands of the waiting public.
"Say somebody has a show coming to town – Lifesavas opens up for Mos Def," Cool Nutz says. Lifesavas gets an interview on the air and plenty of album play.
"The problem is that some local artists don't get out and work it enough," he said.
Starchile agrees. The problem: everyone's an artist. But a myspace page alone won't do it, he says.
"If you go to any record store you see a handful of artists," said Starchile, a recording artist who also hosts Hood Radio on Jammin'. "We need other artists to step up."
His hope with Cool Nutz's show is that it will get everyone to realize the level of dedication needed to make it as a performer and showcase more than just hip hop. Portland in many ways has more talent than New York or Los Angeles, says Starchile, all it takes is professionalism and dedication. With nothing but local access on the Breakout Show, Starchile hopes the artists will put forth their best work.
"On my show, I have to choose between your record or the new Talib Kwali or the new Mos Def," he said. "Cool Nutz doesn't have that choice. It may only be an hour, but you got action."
When the old Jammin' 95.5 FM was slated for destruction by its previous owners, Rose City Radio, there was concern in the hip hop community that a precious local music source would be gone. Nationally recognized DJ OG One told The Skanner that with the emergence of Cool Nutz's show and his own Underground Show back on the air on Sundays, it could mean big things for the Portland scene – but only if people support it. Major record companies look at local radio exposure as a means of test-marketing a potential artist.
"If at the end of the day it's not supported by listeners, what could have been a positive will turn into a negative," OG One said, who co-hosts Hood Radio Sundays on Jammin' from 8 p.m. to Midnight with Starchile and DJ Juggernaut. OG One was also named the official DJ for the Trailblazers this year and was featured on the June Cornerstone Mixtape, along with Juggernaut and Starchile.
Without community support, radio managers will have little incentive to promote local shows. But Jammin's new owners seem inclined to change the Clear Channel approach – one playlist for the entire country. And Cool Nutz hopes to test market regional artists a lot more than just an hour a week. He said his talks with Jammin's program director stipulated that standout artists from his show would find their way into regular rotation. Inviting national artists and record company reps on the show will also help artists get a better understanding of what it takes to make it in today's competitive music market.
In addition to the music, the Northwest Breakout Show will feature head-to-head lyrical combat in its Bar 4 Bar segment – allowing local artists to try out their talent over some of the best instrumentals out there. Cool Nutz will also be releasing a new mixed tape every other month and hold a release party to feature some of the artists on the tape.
When the show premiers in less than a month, Starchile and OG One agree that it will be on the listeners and artists to make the show a success – Cool Nutz himself is already a well-established figure of success.
"There's nobody better and more qualified to handle that show," says Starchile.
Artists can send their music to Jammin 107.5, c/o The Northwest Breakout Show, 2040 SW 1st Ave., Portland, OR 97201. Music must be radio edited, mastered and from a currently released or upcoming album. Full albums are also welcome.