New Book Explores the Heart of a Man 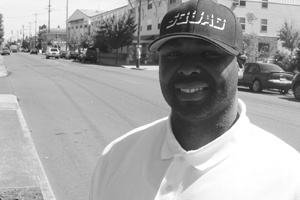 His second book, "What Happens When It Doesn't Hurt Anymore," is part two in his Diary of a Man series. He describes it as a sort of spoken-word conversation about his own emotions – as a male -- and how to deal with them.

"The first one is 'Sorry Daddy I Didn't Know' -- it's pretty much a story about what we as men don't talk about in public," Two says. "Real down to earth, minus all that rough, tough masculinity – we do cry too, so, it's just telling people how, from a man's perspective, pulling no punches at all, just what happened, how it evolved, and how to move forward from that."

His current effort continues the inner dialogue of moving on from heartbreak, and learning to understand how to cope with one's emotional core.

"The thing that drove me to do this was the fact that, very often when we're in spoken word situations, or we talk around school or the workplace, I didn't hear anything like what I was going through," Williams Two said. "More times than not you hear the whole cliché of the power of what the man will let me do, the politics, how strong the opposite sex is and how we love them -- I was just saying okay, there's another side to this."

During the past year, Williams Two, a Jefferson high School graduate, ran a credible campaign for Portland City Council. He says he plans to run again.

He's also organizing the Diversity Institute, which, together with the Albina Opportunity School, Portland Community College and the Portland Development Commission are kicking off the "Jazz on the Mississippi" Festival Thursday, Sept. 11 on North Mississippi at the corner of Beech Street, with a poetry stage at Shaver Street starting at 6 p.m.

"Everyone's talking about men's issues like divorce, abortion, and how you can deal with that, when that relationship falls through and you've begged her to hang on and then it just dissolves," Williams Two says. "Or let's just say you run into the growing pains of it all, and you're living through word for word what happens.

"I found that as I went through these different things then there was a whole pool of people I could talk to, then there was a sign up here for the boys club – but you know you only get invited after you've been through some things."

Even as young men's issues appear in the news, Williams Two says, not enough time is spent trying to understand what's at their root.

"Some people don't realize the depression issue that men have – drug using, womanizing, fighting – all these things are coping mechanisms for things we all deal with when we don't feel comfortable sharing our feelings," he says. "We'd rather fight, or get something to drink, or let me see who I can be with tonight, and that's all the insecurity that we deal with that we don't talk about."

He says two books shaped his point of view about life: Richard Wright's classic, "Black Boy," and the Book of Ecclesiastes in the Bible.

"Things I could identify with were in those pieces," he says. "I went from this kind of distortion to where it was clear all the sudden."

It was hard to put his feelings into his book projects, but the author says laying out his own vulnerability may be the key step in helping the rest of the world understand more about men – and helping men deal with the issues in their lives.

"You would be surprised about some of the stuff, some of the horror stories cats go through that they don't talk about," he said. "Just coming from that end, just taking all that stuff that nobody every touches or identifies."