Math Teacher Steps Up at Jefferson 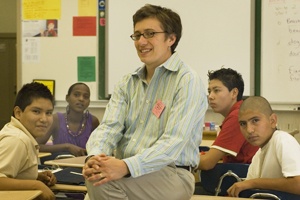 In June, the school district released a report that spelled out Jefferson High School's problems – problems that had long been talked about by many of the teachers, students and even administrators.

The report mirrored many of the findings of The Skanner's investigative piece that was published several weeks before the district's official report.

Among them, Jefferson suffers more theft and vandalism than any other school, and excessively high staff turnover. According to the report, Jefferson's administrators are unprepared to start the school year without problems.

The district ordered a restructuring of the current academy system, hiring one new administrator – Vice Principal Margaret Calvert -- to oversee the now-merged Science and Arts academies. The Young Women's and Men's academies remain in their current structure, although the Young Men's academy has a new leader this year.

And a new administrator of high schools was hired to oversee Jefferson's Principal, Cynthia Harris, who is now entering her second year at the school.

Calvert, who spent the last two years as a teacher on special assignment to assist Jefferson's Math Department, sat down with The Skanner recently to talk about her expectations -- measuring progress, and fixing longstanding problems.

Calvert, whose oldest son attends Vernon School, a Jefferson feeder school, says she is committed to helping Portland's oldest high school, but people need to keep in mind that improvements take time in education. Also, it's hard to know what really works.

"There is almost no direct linear relationship (between a reform and improvement)," she said. "That cause and effect piece doesn't happen. Test scores get reported, but it's not the same group of kids. … We look at cohorts of kids and see how they're progressing. You get averages, how many students come into high school and make 8th grade benchmarks and what happens when they get there?"

As a matter of measurement, Calvert says that while test scores indicate where a class of students are at any given time, increasing the number of neighborhood students attending Jefferson will have a greater effect on achievement. Currently, about 1,200 students living in the Jefferson neighborhood chose to attend other high schools in the district. Slightly less than 500 are actually enrolled in the main Jefferson campus.

"That's a thermometer, but that takes a while," she said. "We can't say we can change that in a year. You have to change the perception and that takes a lot longer. What can be put into place to support students – you need at least three years educationally for a new reform to be in place for you to say whether it was effective or not."

And while it seems that the district only gave Jefferson's academy system two years – yet another reform over the last several decades never left to fully mature – Calvert says the programs and classes are still in place – they've just been streamlined. Classes that everyone must take – such as Language Arts and Math – are not duplicated, and electives are more easily available to all students.

They've even sent a number of teachers to be qualified for Advanced Placement teaching. Both Calvert and Toni Hunter, recently appointed high schools supervisor, say having advanced placement classes in place by the spring may not be feasible.

"We can forcast for it, but can we populate the classes," Calvert asked. "You have to build the programs. You have to be very thoughtful about it. You can't do it all at once. You want to make sure kids are ready and able to be successful in them. One of my big personal standpoint pieces is that we're making purposeful decisions about programs and initiatives that are happening here. And there's a tendency to go too many directions at once … While they're all well intentioned, you can have too many good ideas."

Calvert wants to make sure Jefferson's successful programs – Jefferson Dancers, the art programs, health technology – aren't allowed to deteriorate as other programs are encouraged to grow – as long as this is the direction the school wants to grow in. The key is continuity, says Calvert.

As the one of the first White administrators to lead the majority Black high school in the last several years, Calvert says she feels her race hasn't been an issue inside the school walls.

"There are realities to what the perception of Jefferson is," she said. "And being sensitive to its role and importance to the African American community is important. There are implications – but those are external. Internally, I haven't felt it. There certainly is an external play -- who I am and what I look like plays a role."

What students seem more concerned with is what she's going to do at Jefferson while she's here. And although Calvert acknowledges that she can't guarantee her district bosses will keep her at Jefferson forever, she's committed to her neighborhood school.

"One of the very first students I talked to at the beginning of the summer (asked), 'So you're the latest round?'" Calvert said.

Her question was simple: "So what are you going to bring to Jefferson?"

"My focus will always be on what's happening in these walls and what are we doing in this building to support kids," she said.

Part of that will be helping the attendance clerk make sure more students are attending class. Attendance was frequently cited as one of the main problems at Jefferson, some teachers who talked to The Skanner indicated that as many as 30 percent of their students were absent on any given day last year – a problem that was not adequately addressed by the administration, they said. Calvert says she intends to get to know as many kids as possible.

"You have to know kids, they have to know you," she said. "They have to see you. They're used to people disappearing, visibility is really critical. It's about relationships, seeing the students, not the behavior. I want to know a student by name before they ever get sent to me. I want don't want to see incidents, I want to see people."