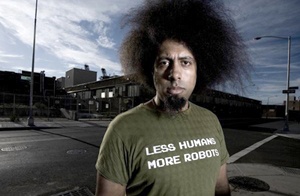 Reggie Watts performs his shows "Transition" and "Occurance" next week as part of Time-Based Art.

This week the Portland Institute for Contemporary Arts converge on locations around Portland to present the 10-day Time-Based Art Festival. In it's sixth year, the festival is a combination of contemporary performance, dance, music, new media and visual arts projects running from Sept. 4 to 14.
To try and categorize the art festival is difficult, as is defined by the written description from artistic curator, Mark Russell.
"This festival wakes up early. This festival goes to bed late. This festival is about hope. This festival is about beauty. This festival is awkward. This is a bawdy nasty festival that your mom told you to stay away from. This is a festival that owns its mistakes," Russell said. "This is a festival that really knows how to dance …"
The festival will kick off with the Opening Night at THE WORKS at 9:30 p.m. The free show will feature performances from Deelay Ceelay, Flash Choir and DJ Acidophilus. THE WORKS is a venue inside the Leftbank building, 240 N. Broadway – a building once known as the Multicraft Plastics building. Beginning at 9 p.m. at Leftbank, TBA will open the visual art offerings of the festival with On Sight Salon. Artists and program directors will be there for some informal talks. That program is free.
From there, the festival takes on a life of its own – featuring a wide array of talents from around the globe. Friday alone features 13 different performances throughout the day — and throughout the week  you can see Ice Rod perform "It's About Sex and Hip Hop," Reggie Watts working his way through "Transition," Khris Soden taking you on a virtual tour of Tilburg or Daniel Beaty performing a combination of music, poetry, comedy and drama in "Resurrection."
For the full calendar of events, visit www.pica.org. Tickets for individual shows are available at the Portland Center for Performing Arts box office at 1111 SW Broadway starting on Thursday, Aug. 4. Festival passes can be ordered by calling 503-224-PICA. Tickets are also available at www.ticketweb.com for a 15 percent service charge.