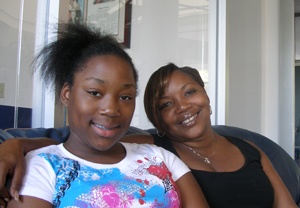 Christeen Johnson sits with her daughter, Julisa Lowe. Johnson has been operating a foundation that gives away automatic external defibrillators to schools, nonprofits and other public gathering places. She's taken on this mission after her son, Eddie Barnett Jr. died of cardiac arrest during a basketball game in 2005. Three years later, she wants to know why Portland Public Schools still don't have the defibrillators, or even a plan to put them in place, in all of their schools. She has donated defibrillators to all of the schools her son attended, but says the district now won't even accept donated defibrillators. The district says they need a plan to manage all the machines – a plan they say is nearly complete.
For Johnson, a member of Parent Heart Watch, that's not soon enough. She says she knows of too many parents of children who have died of a heart condition. Her son's life could have been saved by the electric impulses provided by the machines, which cost about $1,000. In order to save money on the units, Johnson has partnered with Philips, who gives her special deals on donated units.
"I'm really tired because it's frustrating," she said. "and it makes no sense."
So far Johnson has donated units to Camp Caldera, Ethos Music, and inspired the city of Portland to install the units in every building. She's currently trying to organize heart testing of athletes before the start of basketball season. She's hoping to hold the event in the fall at Self Enhancement, Inc. Contact the Eddie Barnett Jr. Foundation at 503-756-8541, or visit www.ebjrfoundation.org.