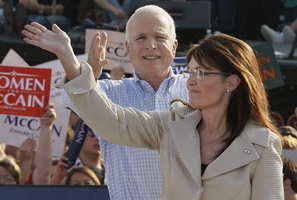 John McCain announced his vice-presidential pick Friday – Alaska Gov. Sarah Palin, a 44-year-old self-described "hockey mom" who was previously the mayor of a town of Wasilla, Alaska, population 6,500.
Palin has been described as a conservative that fought big oil in Alaska, funneling profits from oil companies into Alaska state coffers. She is also staunchly against abortion rights, which fueled many social conservatives to say she was a good choice that would energize that wing of the Republican Party. Early speculation on a number of pro-choice candidates had many evangelical conservatives in an uproar.
Although the newcomer made waves after ousting a sitting Republican governor in a primary in 2006, beating out a former governor as well, riding high approval ratings at home, she has come under scrutiny for a firing she made of Alaska's public safety commissioner after he refused to fire her former brother-in-law, who was a state trooper. The Republican-controlled legislature launched the investigation. She has reportedly distanced herself from Sen. Ted Stevens, Alaska's most prominent politician, and Rep. Don Young, who are currently under investigation for corruption.
She also led the Alaska Oil and Gas Conservation Commission, where she exposed ethical violations by the state GOP chairman. She attended the University of Idaho, receiving a degree in journalism and worked as a sports reporter at an Anchorage television station.
--compiled from AP reports