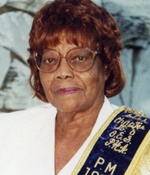 Johnnie Mae Hastings has died. She was born to Van and Luvenia (Elliott) Alexander on Nov. 11, 1932 in Louann, Ark.
She was the 16th child born to this union, which yielded four sets of twins, all of whom preceded her in death.
She joined the New Jerusalem Missionary Baptist Church in Louann, Ark., at an early age.
Hastings came to Portland, Ore., in 1949. She was a graduate of Jefferson High School in 1950 and later enrolled in a nursing program at Clark College and became a Licensed Nurse. She worked many years at Holiday Park Hospital.
Hastings had many hobbies but the one she loved and enjoyed most was fishing. She never bragged about her fishing, but friends said if the fish weren't biting and there was just one to be caught she was surely going to catch it.
She was an active member of Ada Chapter Eastern Stars since the 1970s. Holding several titles including secretary, past matron, member of the executive board and the grand building committee.
Hastings was a faithful member of Allen Temple Church for many years and was on the Stewart Board.
She was also an active member of Volunteers Of America and has received several awards.
She is survived by her daughter Rhonda (Hastings) Roundtree (Ray); grandson John Newell III; granddaughter Victoria Newell; great grandchildren Romel and Sir James Newell; and nieces and nephews.
Services by Cox & Cox.