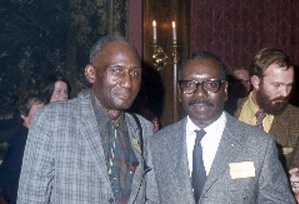 Admission to the National African American Museum is free Sept. 4 for all volunteers. The show is the second half of its inaugural exhibit, "Making a Life, Creating a World: Jacob Lawrence and James W. Washington, Jr."
Newly featured artwork and objects will help illuminate an often-overlooked side of both artists as community leaders and civic activists.
Also at NAAM's NW Gallery, Sept. 18 is the NAAM Reading Series, presenting Jim Kershner's "Carl Maxey: A Fighting Life."
Carl Maxey was, in his own words, a kid who started from scratch – "Black scratch."
Much of his childhood was spent in Spokane Children's Home, and despite being kicked out along with the only other "colored" orphan at the home, he went on to an NCAA Championship career as a boxer at Gonzaga University and as a lawyer who became famous for championing civil rights and defending controversial clients, including the Seattle Seven.
He ran on an anti-war platform against "Scoop" Jackson and became a legend for pursuing his life's work: equality. Join Jim Kershner, a reporter for the Spokane Spokesman-Review, as he brings the first Carl Maxey biography to Seattle.
All readings are followed by book signings. Free with Museum admission, $6 adults, $4 students and seniors. The event at the Northwest African American Museum Legacy Gallery runs 6 to 7 p.m.