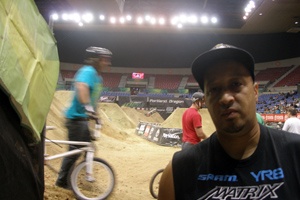 "It happens," says Jimmy Mac, after watching BMXer TJ Ellis crash his bike on his first run. Ellis' second competition run – a successful trick run around the dirt course at the Wendy's Invitational AST Dew Tour – didn't earn him enough points to stay in the competition in Portland. Mac, who manages Ellis and owns the Bulldog Bike Company, says he's not worried. The 22-year-old pro — and the only African American BMX Dirt competitor during this stop of the Action Sports Tour — is still in the running for the next stop of the tour in Salt Lake City.
Ellis is considered one of the best in his field and pulled one of the most daring tricks during the 2007 Action Sports Tour in Portland – the double back flip. Ellis says he'll be waiting until the finals in Orlando to pull off the trick again.
While BMX racing has received a huge boost from its inclusion as an Olympic sport this year, BMX Dirt freestyle riding still remains relatively underground, although Mac says major corporate sponsors are injecting some much-needed capital in the sport. Riders risk loss of life and limb as they gracefully – and sometimes not so gracefully – do flips, 360 degree tail flips, and other split second aerials on dirt ramps for the pleasure of the crowd and their colleagues.
After completing his second run of the competition, Ellis told The Skanner there are many African American BMX street riders and amateur riders, but when it comes to pros, there's only a handful.
"When you're trying to get to the pro level, you've got to have the skills," he said. Ellis has been riding competitively for three years now and his manager says he holds a lot of promise for New York-based Bulldog Bikes, the company Ellis rides for. Mac says the sport has caught the eyes of major corporations in recent years and now, thanks to a major sponsorship from Toyota, is able to support many up and coming riders financially. The corporate game has become a necessary part of BMX, providing much of the money it takes to tour the country with some of the best athletes in the sport.
Mac, who started Bulldog Bikes about 11 years ago, has seen his company grow into a well-respected brand within BMX that now represents riders from around the globe. But Mac had to battle to get the same recognition as many West Coast companies. 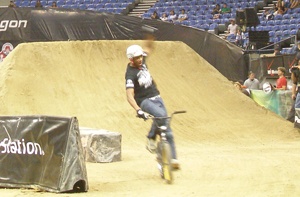 "We didn't get support because we didn't look like them," he says, the same problem many riders have faced.
But his urban BMX company has been able to gain ground by other means. He's used his sources in the music industry to promote his brand, and gets spots in hip-hop magazines such as Source. He's even a spokesperson for the Toyota Matrix. The rider-owned revolution is well-underway, and despite the fact that mass-produced brands like Mongoose still sell a lot of bikes, small brands are the passion of the industry.
"The old corporate guys are out," Mac said.
And the BMX rider/builders are in. With 27 total riders worldwide, Mac says Ellis stands to become the "general" leading the pack. The AST Dew Tour – with sponsors as large as Toyota, Wendy's and Sony – allows other small companies and riders to compete against some of the biggest names in the industry.
The smaller bike companies are also making it easier for urban-based and small town competitors to have a shot at sponsorship, says Mac. Many riders in the past were looked over if they didn't live in a major metropolitan area. And for a regular middle class kid, sponsorship can mean the difference between competing and being a weekend warrior. Mac knows how important money can be to get from competition to competition.
"I was one of those middle class kids," he says.