Evidence is mounting that the Multnomah County agency charged with preparing Portland to cope with a disaster, the Office of Emergency Management, is now its own disaster area.
Poor leadership, mismanagement, and missing -- possibly even stolen -- equipment, are among the allegations under investigation. County Chair Ted Wheeler is under fire for failing to notice the problems and take action sooner.
Red flags were raised after last year's $27 million TOPOFF 4 terrorism preparedness exercise. A draft report on the exercise, released to The Skanner Wednesday by the city emergency management office, confirms earlier reports that coordination difficulties between Multnomah County and the city showed up during the exercise.
The report also states that the exercise was valuable for regional emergency services staff and volunteers, and noted strengths in the emergency response system.

Coordination Issues
The report said Multnomah County was slow to reply to the city's requests. For example, it was not until the third day of the exercise that the county responded to the city's request for a liaison with the county's health department.
"There certainly were coordination issues with the county," said Carmen Merlo, director of the Portland Office of Emergency Management. "It was the case that requests to the Multnomah County Emergency Operations Center went unanswered for some time."
James Spitzer, one of the most experienced emergency managers in the county and the lead controller of TOPOFF, completed his report on the exercise in January. While praising the commitment and hard work of the participants, he noted coordination problems at the command levels.
So what about communication between the county emergency operations center and the city, for example?
"It has to improve," Spitzer said.

Director Resigns
The lid boiled off the pot on Aug. 5, when the county announced that Emergency Management Director George Whitney had resigned – with no reason offered. In fact, Wheeler and Jana McLellan, deputy chief operating officer for the county, met with Whitney on Aug. 1 to ask for his resignation, after receiving complaints about Whitney's performance.
Whitney declined The Skanner's request for an interview.
According to a July 30 memo from Mayor Tom Potter, [see at end of article below] other regional official allege Whitney "has created an atmosphere of distrust," has "a bullying attitude" to regional emergency staffers, "makes many promises, but is unreliable and doesn't follow through…" and "misrepresents conversations and decisions."
Potter's memo details how emergency staff from Gresham, Portland, Clackamas County, Clark County and the state emergency management office in Salem all reported problems with Whitney's attitude and performance.
Commissioner Lisa Naito echoed these concerns in a memo to Wheeler on Aug. 3. [see at end of article below] Naito asked Wheeler to fire Whitney.
"You will recall that last year after the TOPOFF exercise I spoke to you about George's inability to lead his department, collaborate with other jurisdictions and lead the county in the event of an emergency," Naito says in the four-page memo. "Frankly, I remain convinced that he is incompetent."

Memos Tell Story
In the memo, Naito goes on to say that her opinion crystallized during the TOPOFF 4 Homeland security exercise last October, which brought together leaders from five counties, the state and even federal level to practice managing a major disaster. The training exercise asked leaders, health workers and citizen volunteers to imagine that a "dirty bomb" had exploded in Portland.
Naito states in the memo that Whitney had failed to provide her with vital information about her role, leaving her unprepared to lead.
Yet on Aug. 8 McClellan, who briefly stepped in to fill the leadership vacuum after Whitney's departure, told The Skanner, "George has been marvelous in getting the grant dollars into the county and the region."
Cathy Harrington, who coordinates emergency management for Gresham, said attracting Homeland Security grants to the region was a team effort.
"I don't want to say George didn't have an influence -- because he did write some grants, but there are a lot of people writing grants," Harrington said.
According to other memos between Naito and county auditor LaVonne Griffin-Valade, a consultant has estimated that "millions of dollars" in equipment is unaccounted for. The losses likely occurred before Whitney's arrival at the county in January 2007.
Griffin-Valade said her department is working an on inventory of county equipment that will take months to complete.
Another red flag was the poor condition of Multnomah County's Emergency Management Web site – potentially a key source of information for many Portlanders. The site is so out of date that a listed contact number for a staff member offers a recorded snow warning.
Plans on the site date from 2002 and 2006. And if you want to know how to prepare your family for a disaster, you won't find that information on the county site.
A 2006 consultant's report slammed the county's emergency management effort. That report cited lack of adequate staff and a poor Web site.

Sad Story
In Gresham, Harrington stressed that relationships with other county staff are good.
"We still do have a good relationship with the county," she said. "We have some highly skilled people working on emergency management and the region really is very well prepared."
Rhys Scholes, communications coordinator for Wheeler, blamed hiring problems and lack of funds to update the Website.
"Yes it is terrible," Scholes said. "We're apologetic about it. We've just hired a new Web site manager – it is a long sad story." 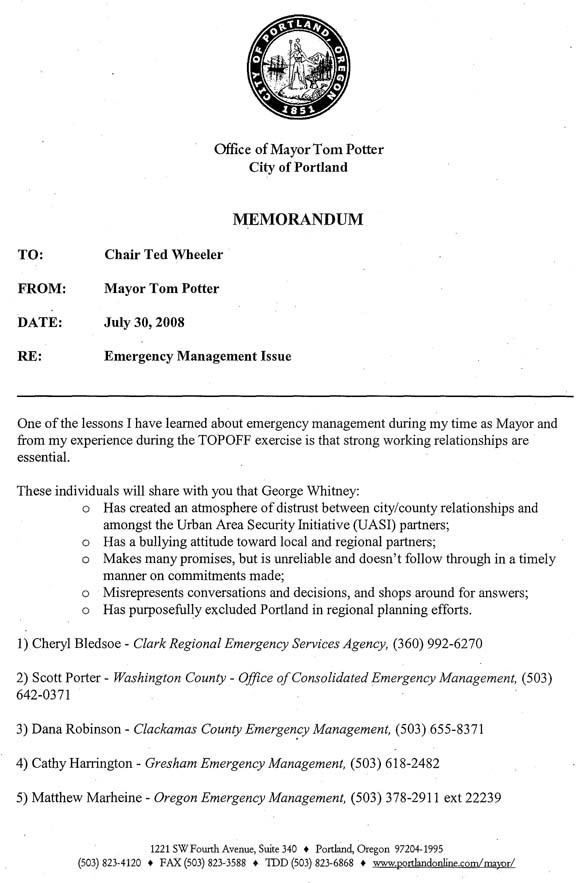