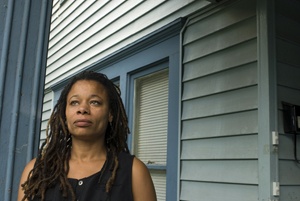 Since being diagnosed with multiple sclerosis, Sharie Smith has lived on a fixed income in an apartment on Northeast Fargo Street. Her rent jumped 30 percent this summer; now it takes up almost her entire monthly check. Her landlord told her if she doesn't like it, she can move.
Photo by Julie Keefe

Sharie Smith and her little dog Domino live in a hundred-year-old apartment in an expansive old house on Northeast Fargo Street.
Since being diagnosed with multiple sclerosis, Smith has lived on a $700 Social Security payment.
One day this summer, her rent jumped 30 percent; now it takes up almost her entire monthly check.
And there's not much she can do about it.
"I said, that's a huge gouge. And the landlord said, then you can move."
Local tenants rights activists say the increasing rate of home foreclosures has dumped a new population of former homeowners into the rental market, driving up rents across the region.
With the increasing number of renters, more and more vulnerable people are being squeezed out at the bottom.
"According to landlord/tenant statute, there's no cap on how much landlords can raise the rent – they can do it every month if they want to," said Nancy Swann, program assistant for the Community Alliance of Tenants. "I don't know what we're going to do but it's a landlord's market and they can raise rents as much as they want."
Tenants facing rent increases aren't the only problem, Swann says; foreclosures hurt renters another way as well.
"With renters who live in foreclosed buildings, we have to refer people to lawyers, and sometimes they get just 24 hours to leave," she said. "It's anywhere from 24 hours to 10 days — not much time when the housing market is so tight and the prices are going up."
Swann said renters caught in the crossfire of building owners' foreclosure crises are economically penalized.
"With foreclosures, all bets are off and people don't even get their deposits back," Swann said. "You hear all the time about middle class families affected by foreclosure, but I never read about how it impacts poor households."
Smith says she's seen her neighbors pushed out one by one, and replaced with out-of-towner who can afford more costly properties.
"Essentially the neighborhood has changed a great deal over the past seven years, regentrification and all," Smith said. "The building was actually one of the last ones on the block owned by an African American family."
The original owner was born and raised in the home, his parents lived there, and he still has other relatives there. Smith says that owner sold the house two years ago, and the real estate agent who listed the apartment decided to buy it.
The building is attractive, but a brief tour shows rotting wood, ancient flooring and rickety stair rails.
Smith ticks off the dangerous conditions in the building on the fingers of two hands: a leaky sink in the kitchen floods the apartment downstairs; the kitchen leak caused Smith to turn off her hot water to keep the leak from filling the neighbor's light fixture with water; because of that Smith went without hot water in the kitchen for two and a half months.
"This light bulb in my hallway outside my door is constantly on 24 hours – you have to unscrew it to turn it off," she said. "But we have no electricity on the front porch – it's just pitch black out there."
These situations are dicey, Swann says, because sometimes the official avenue for grievance backfires.
"The first thing to do is ask for the repairs, keep very good documentation," Swann said. "Keep written records of the first letter, the second letter, the third letter."
If all else fails, tenants can file a complain with the City Inspections Neighborhood Inspection Program
"The problem is the landlords get mad if people turn them in to the city inspector," Swann said. "So a lot of people are afraid to call the inspectors because they're afraid they'll get evicted. And they're right."
Meanwhile, Smith is desperately looking for a new apartment that she can afford, but she says it's heartbreaking to move away from her neighborhood.
"Eventually we're probably going to see an African American ski champion because all the locals will have been displaced out there," Smith says. "Gresham is going to be the new 'hood, skiing on Mt. Hood will be the new activity, and maybe we'll see an Olympic champion someday. That's my prediction."

Volunteers needed
The Community Alliance of Tenants is recruiting volunteers to staff their Renters Rights Hotline. The training is Saturday and Sunday, Sept. 6 and 7 from 2 to 6:30 pm. At the Augustana Lutheran Church, 2710 NE 14th St. Snacks are provided.
CAT is also holding its annual meeting Oct. 1. For more information go to www.oregoncat.org, or call 503-460-9702.
The Renters' Rights Hotline is 503-288-0130.

Renter Reform
A year-long reform effort, the Portland Quality Rental Housing Workgroup, makes its official  recommendations at HCDC's next meeting -Wednesday, Sept. 3, at 6:30 p.m. at the Multnomah County building, 501 SE Hawthorne.
The proposed reforms would make it easier for tenants to make repairs and provide city funds to hire lawyers for people who are kicked out for requesting repairs, among other things.