Brian Stimson and Lisa Loving of The Skanner
Published: 27 August 2008 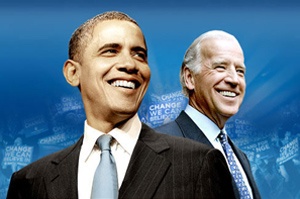 The Democratic Party has formally nominated Senator Barack Obama as its presidential candidate. The historic moment came after Senator Hillary Clinton walked onto the floor of the convention hall and asked Democratic delegates to suspend their count and back Obama by acclamation.
Senator Joe Biden headlined the evening speakers, accepting the vice-presidential nomination. After Biden spoke, Obama made a surprise appearance on stage, one day before he formally accepts the nomination before 80,000 supporters at Invesco Field.
Former Democratic presidential candidate John Kerry also addressed the convention. Kerry called Republican presidential candidate John McCain's campaign "insulting," "pathetic" and "desperate."
Meanwhile, outside the convention center in Denver, an estimated 140 demonstrators have been arrested as well as one reporter for ABC News, who was filming corporate sponsors as they left a Democratic party banquet. The reporter is part of a team preparing an investigative report on the influence of corporate lobbyists on the Democratic party. He was roughed up by police, threatened with a beating and arrested. The arrest was filmed and is now being rebroadcast on television and the Internet.

To protest or to lobby? Oregon's Democratic African American delegation is choosing the latter.
Several delegates at the Democratic National Convention say the busy, and at-times overwhelming, event is allowing them the opportunity to be heard by some of the biggest decision makers in the United States.
Shirley Minor, delegate for the 3rd Congressional District, John Cuff, delegate-at-large, and Gail Rasmussen, superdelegate, spoke with The Skanner over the phone this week about their time at the Denver convention.
The delegates, who are elected by Democratic Party members, say they've had the chance to speak with elected officials, union representatives, business leaders and others who can make a difference in public policy.
"I finally feel like people are listening to me," said Minor, who is affiliated with Service Employees International Union, and has been advocating family wages jobs, training programs and other issues involving the work force.
Cuff, who is also with SEIU, said the main issues he discusses are problems experienced by rural Oregonians, including land use planning, health care access, living wage jobs, senior services.
"When you're a delegate, they look at us as the heart and soul of the party," he said. "We know what's going on out there."
Even the police treat delegates with a smile, say Cuff and Minor, who are able to move around the city much easier with official credentials. The Skanner's Executive Editor Bobbie Foster, who is attending the convention, says the police presence in the city is overwhelming and getting around can be tough – streets can be closed without notice, making navigation difficult for even Denver natives.
The delegates say they have all had to pace themselves at the convention, or risk burnout. Rasmussen said another delegate only got three hours of sleep in one night, and Cuff says his schedule has him out of his hotel door at 6:30 a.m. and with the day not ending until well after 11 p.m. Many caucuses, luncheons, meetings and speeches overlap, causing the delegates to prioritize their personal political interests and the interests of their sponsors – who help some delegates cover the $3,500 to $5,000 it costs to attend the convention. Cuff said it's essential that future minority delegates band together to cover the financial obligations. If you don't have the money, or the time to commit, he said you won't be able to get your voice heard inside the convention halls.
"The people here are the people involved in politics, who are willing to spend the time," Cuff said. "The college students, they don't have the time or they don't have the money. Much of this revolves around the financial ability to do it."
After casting her vote on Wednesday morning for Sen. Barack Obama, Rasmussen said she will be meeting with other educators to discuss pre-kindergarten education, health care affordability, and then it's on to the speeches – Jeff Merkley, Bill Clinton, Joe Biden and others.
"I really believe this election cycle has given the old and young alike an opportunity to participate," Rasmussen said. "And those who've been here on the floor need to bring the excitement back home."