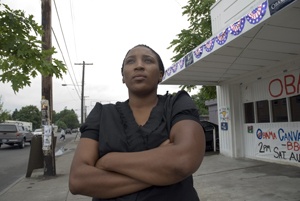 As law enforcement in Portland prepares to address the rise in gang-related shootings, one local woman is out to advocate for the young people at the center of the storm.
Ronisha Harris, founder of The Respect Project, is a criminal justice student and former inner Northeast Portland resident working since June of this year to change police attitudes towards youth who hang out on the street.
She's also focused on educating local kids about the exceptional dangers of Measure 11.
"Personally I think officers should have better communication skills when they approach young people," Harris told The Skanner.
"You can't fault us for what we did as kids, but they approach young kids, minorities, as if they're nothing — there's no respect," she said. "I think that's where the trouble lies, because in order to get a good response you have to have some type of respect."
Harris is working to promote The Respect Project because no other public efforts are reaching out to young women and girls vulnerable to the gang life.
"It's about girls influenced by gangs and other criminal activities, trying to steer them straight, making sure they stay on track," she said.
At a recent meeting of the Portland Youth Violence Prevention Committee, Harris chastised law enforcement officials and city representatives for not doing enough to talk to young people with respect and engage them in a dialogue about gun violence.
"I'm out there and I'm not seeing anyone stop anyone and talk to these young people," Harris told the gathering of police commanders and city employees. "I just think we need to get out there and be with these kids."
Her comments were echoed by outreach workers from around the city, drawing a response from Portland Youth Violence Prevention Director Rob Ingram.
"We are talking about the resources we need," he said. "When the resources diminish, can you do the things you need to do?
"The officers' resources keep getting cut," Ingram said. "These outreach people are doing a great job, but their resources are getting cut."
Officers say this year has seen a record high number of shots-fired reports investigated by the Portland Police Gang Enforcement Team.
A total of 41 call-outs had been posted as of Aug. 6 – already one incident more than all of last year.
In 2003, 46 were investigated; 45 in 2004.
Harris said she decided to dedicate her life to helping vulnerable girls because of her own life experience, and an experience she had with her daughter.
In the early 80s and 90s, Harris says she used to be a gang member. In January 2000, her 12-year-old daughter got in trouble after an incident on a MAX train, and was placed on probation.
"And when I met with her probation officer, I asked what kind of program they had for her to steer her out of trouble, because I remember the GIFT program – Gang Influenced Female Team," Harris said. "I was a part of that program in 1993, I was a participant, I was actually a client of that program."
The officer replied that there was no program like that for girls.
These days, Measure 11 has ramped up the dangers of low-level criminal activity for young people, and Harris says not all kids understand what that can mean for them.
"Measure 11 is a mandatory sentence, the judge has no leniency, and when they get out it goes on their adult criminal record, it can't be wiped away," she said.
"So once again, the kids will probably, if you go in at 15, they get out they'll be young, they'll have a felony record, and once again they'll have two strikes against them if they're trying to find employment, and it just really messes up their life."
As part of her work with the Respect Project, Harris simply goes out on the streets and builds relationships with the young people she meets.
"I go out and talk with kids that I just see hanging out," she said. "I hang out sometimes, I talk to them about whether this is the life they really want — but I explain it to them, the part of the gang life comes with consequences, it isn't just all fun and games."
Harris says the other big part of her work is trying to change the public's – and law enforcement's — perceptions of neighborhood youth.
"One of the biggest myths is that any kids who hang out are in gangs," she said. "I have a friend who's son is 12, and her kids were all involved gang members in the police's book, and they tell this little 12 year old guy, 'you're gonna be a crip just like your uncles… when are you gonna join the set?'"
Harris is actively seeking more support for her project from other groups and from government agencies. She has a long-term development plan, and a vision for the future.
"Five years from now I'd like to say I helped that person succeed in life with my life experience – not what I learned in school, but real life experience," Harris said. "And I want that in five years programs like GIFT and programs like I'm designing will not be wiped away."
For more information email Harris at [email protected].