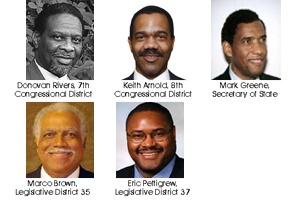 Washington State has long been a leader among states to grant the right to vote to those who could not. However, in its 119 years as state, it has been historically under-represented by minorities and has yet to elect a Black candidate to a national congressional seat.
In the upcoming primary on Aug. 19 there are 592 candidates on the ballot for national and state seats. Out of these, six are African-American, only two of whom are incumbents.
"I would hope that our representatives would reflect our demographics," said James Bible, president of the Seattle NAACP.
The situation is ironic; even as the nation's attention is riveted by the presidential campaign of Barack Obama, few candidates are riding his coattails on the state or local level.
The question of why this is the case is complex and deep-reaching. There are a range of issues -- from citizen participation, high costs and the high re-election rate of office holders -- that discourage minorities from running.
"Being a publicly elected official isn't all that sexy for folks," said Stacy Noland, Chair of the Civic Engagement & Leadership Empowerment Board for the Urban League of Seattle. "A lot of them are only hearing the negative stuff."
Bible also sees the problem of under-representation in terms of economics. Well-qualified candidates can be prevented from running because of the financial cost of mounting an effective campaign.
He suggests a coordinated and creative plan to ensure greater representation among  African Americans.
"In essence, organizations such as the NAACP and Urban League should be working together to help support well-qualified candidates," said Bible.
Of the two candidates running for Congress, both are challenging incumbents very likely to retain their seats. The re-election rate among incumbents is very high — in the 2000 general election, 98 percent were re-elected nationwide.
Donovan Rivers is a Democrat running against longtime representative Jim McDermott. Rivers was mentored early on by Norm Dicks, Jennifer Dunn and Norm Mailing. They helped to shape his political ambitions and created a sense that he could hold public office.
"My goal, if elected, is to tour every high school in the state and select kids with an interest in politics," said Rivers.  "I want to create a group of minorities in politics to help them reach the ropes of politics whether in the mainstream or not."
Rivers, however, faces an uphill battle to unseat the incumbent candidate. He acknowledged that despite his 32 years of political experience, he does not have the financial resources of other candidates such as Jim McDermott and Darcy Burner.
"It's basically a closed environment," said Rivers. "But in many ways he [McDermott] accepts me running against him."
Rivers also sees victory, not in terms of defeating McDermott, but gathering momentum for the 2010 election. He noted that by comparison to his 2006 congressional campaign, his current one has seen far more interest across the board and compares to climbing steps on a ladder.
What excites him most about the 2008 election is the large influx of new voters hoping for change. This value on change benefits Rivers who is running against a well-established Democrat.
"There are not enough out-front leaders," said Rivers. "People who lead from their conscience and don't just wait and see."
Rivers said that as many 80 percent of people view their representatives negatively. With members of the general public tuning out politics and public service, the need for strong leadership and mentors for the younger generation becomes a necessity.
The solutions to creating more representation among African Americans can also come by having a clear way that they can be involved in the decision-making process, starting from their time in school.
"There needs to be more programs like the Mock Court, which allow kids to go in and role-play," said Noland. "That really brings a lot of the esoteric into reality."
Noland likened this idea and others to a "road readiness" plan in which there is a clear pathway for the younger generation to get involved and fight for issues that they see as relevant.
"At the end of the day, it's a pipeline issue," said Noland, "Without mentors, not enough kids are encouraged to get into politics."
Rivers also sees helping children pursue a path in politics as a way of "balancing the scales." In state that has seen an Asian American governor and now a female governor, the state's third largest minority still remains largely unrepresented on both the state and national congressional assemblies.
For more information visit www.vote.wa.gov.