Grandmother Refuses to Give Up 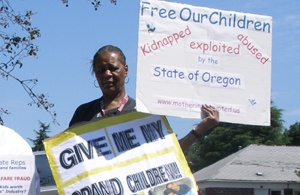 Carollyn Smith's fight continues, but she may be running out of time. Smith has been battling state Child Services since 2005 for custody of two grandchildren, Kofi and C'Lynn, ages 7 and 4, who have lived much of their short lives in the foster care system. Now, they could end up living the rest of their lives without their biological family.
Kofi and C'Lynn, who were taken from their mother after Kofi tested positive for cocaine, were adopted out to a non-biological family. Smith, who already has custody of five of Kofi and C'Lynn's brothers and sisters, almost gained custody of the two in November when a judge said the children could reside in her house. That decision was appealed by a Court Appointed Special Advocate and in the meantime, the adoptive family gained custody.
Smith says in October the adoption will become final – permanently separating the family. Smith has been trying to gain custody of them for nearly three years. The new adoptive family tried for less than a year.
"Why not me?" says Smith, who spent most many days last year holding a one-woman protest in front of the Department of Human Services offices on Alberta Street and Williams Avenue. "What is the problem?"
Officials at Child Services could not comment specifically on the case due to privacy laws. Officials, by law, are supposed to give family priority when determining custody. But in 2007, only 34 percent of foster homes were certified as relatives and 37.5 percent of adoptions went to relatives. The remaining 24.5 percent of adoptions went to non-relatives, and 38 percent to non-related foster parents. Social workers are bound by state guidelines for adoptions and foster parent agreements.
Smith says she was told by a caseworker early on in the process that she was too old, didn't have a big enough house and she couldn't provide adequate protection to the children.
However, while Oregon law states that a "certified family" can't contain more than four children if only one adult is present, it also allows program managers to make exceptions. Kofi and C'Lynn's adoptive family, according to Smith, has seven children. It is not clear how many of the children previously in the adoptive home are biological children.
Chirece Jones, a former member of the now-defunct Sisters in Action for Power, is helping Smith to organize, although she admits protesting the policies of Child Services is difficult. During a recent protest in Salem, she says lawmakers largely pretended not to hear.
"We didn't get a lot of response from people in Salem," she said. "It's hard to have an agenda when brick walls go up everywhere."
Child Services told The Skanner that they were working on several initiatives to address the disproportional number of minority children in the foster care system.
Susan Detlefsen is involved in the organization Mother Interrupted which calls for reform and more transparency with Child Services.
"The problem has been ongoing for over two decades," she said. "As soon as enough people figure out the truth about CPS, I believe we can put an end to it."
Smith mainly just wants her family intact, but she says she will continue her fight against Child Services.
"I will continue until they do right by my grandkids and everybody else's grandkids," she said.
If the adoption is ruled final in October, it becomes "permanent and life long" according to Child Services. All visitation schedules must be approved by the court and the adoptive family. And if the adoptive family doesn't want their adopted son and daughter to see their biological relatives, they are allowed to do that, by law. Smith says she's not allowed to call or write to her grandchildren. All contact must go through the adoptive parents.
Smith has another visit with her grandchildren on the Aug. 27, but after that, she says she's been told it'll be once a year – if that arrangement pleases the adoptive family, that is.
Grandparents Raising Grandchildren meets monthly. For more information call 503-484-6988.