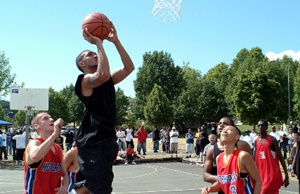 A player on The Klique (in black shirts) attacks the basket against the Hot Shots (in red shirts) during the Heal The Hood AAU Basketball Tournament last weekend.  The event featured top high school players and was modeled after the legendary Rucker Tournament based in Harlem, New York, designed to encourage alternatives to violence.  The tournament was part of the Umoja Festival held Aug. 1 through 3 at Judkins Park. Umoja Fest is the oldest African Heritage Festival in Seattle, featuring a parade, music on three stages, activities for kids and a variety of foods.