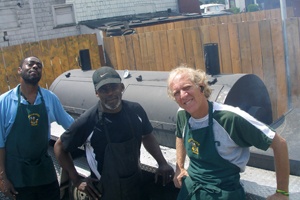 Forrest Pellum, Clay "Doc Q" Clayton, and Scott "Duck" Spaan stand in front of the barbecue of their new outdoor restaurant Out West BBQ on Northeast Alberta Street and 19th Avenue. The trio have been stocking the stomachs of Oregon Ducks fans for years and finally decided to bring their home crafted meats to Northeast Portland.

By Doc Q's count, he has until about November to grow his restaurant business enough to move into a permanent building. But he's not overly concerned. The longtime "doctor of barbecue" is certain the quality of his food can easily draw enough loyal customers by the time the rainy season sets in.
And Clay "Doc Q" Clayton knows all too well that an outside barbecue joint doesn't stand a chance in the rainy Oregon winters. He tried it some years before — to no avail.
This time around, Clayton has a bit more experience under his belt, and the help of Forrest Pellum and Scott Spaan, two friends who have been touring with him on the Oregon Ducks football tailgating circuit for several years now.
For the past five weeks, the three entrepreneurs have been operating the Out West BBQ Company at Northeast 19th Avenue and Alberta Street to an increasing number of loyal customers.
Using all-original spices and rubs developed and honed by Clayton over the years, the barbecue is decidedly a different taste. Not quite Kansas City, a little closer to North Carolina-pit, closer to Louisiana – Clayton's flavors are different. They're western style – or as he describes it, "southern style tomato base with an Asian sweet and sour flair."
He says he sells out nearly every Oregon Ducks tailgating event he caters and he's been marketing his homemade barbecue sauce – "Doc Q's Tailgate'in BBQ Sauce" — to stores and barbecue connoisseurs across the country. He says he's tailgated at every PAC-10 school. That's when he decided to bring Western barbecue to Alberta Street.
"Barbecue has been lacking in this part of town," said Clayton. "I'm filling a niche."
You won't find white bread, greens or macaroni and cheese on the plate. The potato salad and cole slaw on his side menu represent a health conscious way of eating barbecue Clayton has been employing for some years at his own table. He says he's always trying something new to "reach as broad a cross section as I can."
In the increasingly gentrified Alberta neighborhood, Spaan said they were initially worried about how they were going to be accepted. So far, the reception has been good. Spaan says the barbecue crew wants to stay on Alberta when they move out of their outdoor space.
"I don't want it to be trendy," he said. "I want to set up where we can bring a family feel. There aren't many places a family can go out to dinner."
But no matter what the future restaurant looks like – Clayton, Spaan and Pellum want to solidify the Western Barbecue flavor and give it the energy experienced in other parts of the country famous for outdoor cooking.