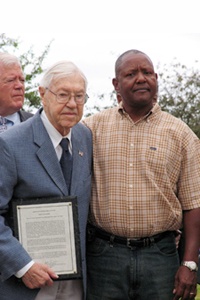 Howard Noyd, 93, one of two attorneys given just 10 days to prepare the defense for all 43 Black soldiers who were wrongfully charged, stands with Ray Snow, son of Samuel Snow (who had traveled from Florida to attend the ceremony but was hospitalized and later died in a Seattle hospital) during the presentations of honorable discharges to the families of the soldiers wrongly convicted.
Photo by Susan Fried

A top-ranking U.S. Army official formally delivered the government's apology on Saturday for wrongdoing in the conviction of 28 Black soldiers accused of rioting and lynching an Italian prisoner of war in Seattle during World War II.
The incident, at Fort Lawton, was the only time in U.S. history that African Americans have stood trial for a mob lynching.
"We had not done right by these soldiers," Ronald James, assistant secretary of the Army for manpower and reserve affairs, said Saturday in front of hundreds of onlookers at the old fort in Discovery Park. "The Army is genuinely sorry. I am genuinely sorry."
King County Executive Ron Sims, Seattle Mayor Greg Nickels, and the Army's highest ranking Black officer, Assistant Secretary of the Army Ronald James, presided over the presentation, which also included survivors of the soldiers, military officers and one of the original defense lawyers.
The convictions were overturned in October 2008, after a years-long campaign by Rep. Jim McDermott, D-Seattle, after he read the book "On American Soil." Published in 2005 by Jack Hamann, a CNN and PBS journalist, and his wife Leslie, the investigative work uncovered long-forgotten information about the riot on the night of Aug. 14, 1944, and subsequent events at Fort Lawton.
"The Army does not do this – the Army gets tens of thousands of appeals all the time," Hamman recently told The Skanner. "They don't reinstate people. But here, not only are they removing the dishonorable discharge, but they're negotiating the amount of back pay and restitution to the survivors."
All but two of the soldiers are dead. One, Samuel Snow of Leesburg, Fla., planned to attend the ceremony but wound up in the hospital instead due to a problem with his pacemaker. He later died. 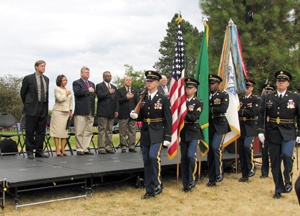 Dozens were injured in the melee that started with a scuffle between an Italian prisoner of war and a Black soldier from the segregated barracks near the POW housing. A POW, Guglielmo Olivotto, was found hanged at the bottom of a bluff the next day.
The Army prosecutor was Leon Jaworski, who went on to become special prosecutor in the Watergate scandal of the early 1970s.
Two defense lawyers were assigned to the case and given two weeks to prepare without ever being shown an Army investigation criticizing the way the riot was handled. Forty-three Black soldiers were charged with rioting -- 28 were eventually convicted.
In his book, Hamann wrote that at least two soldiers were threatened with lynching by Army detectives. When one witness said a "Booker T." was present at the riot but couldn't give any more detail, the Army charged two men by that name. Another was charged with rioting despite the fact that White, Black and Italian POW witnesses all said he tried to quell the disturbance.
One of those attending the ceremony Saturday, Arthur Prevost of Houston, said his father Willie, one of the convicted soldiers, never talked about what had happened.
"I think he was embarrassed," Prevost said. "I wished he had told us." 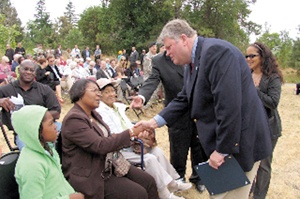 Snow's son, Ray Snow, told the gathering his father felt no animosity for the long-ago injustice.
"He was so honored" by the tribute, Ray Snow said. "We salute you for remembering a travesty that took place." 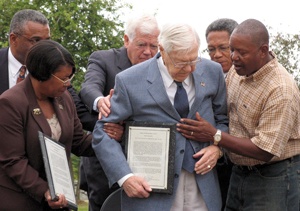 All Photos by Susan Fried