As plans progress to build the interstate bridge across the Columbia River – a transportation project with one foot rooted in historically Black neighborhoods — observers are increasingly pointing to the lack of minority development firms contracted to help in the construction.
Despite the fact that the Oregon Department of Transportation last year published a study showing that Black-owned construction companies had been "underutilized" for the past seven years, the Columbia River Crossing project is on track to worsen the situation – using taxpayer dollars.
Less than 1 percent of all contract dollars allocated in the Columbia Crossing project so far have been awarded to Black-owned firms.
"Even after they got that study they went ahead with that bridge project," said James Posey, president of the National Association of Minority Contractors of Oregon. "Even knowing we had those dismal numbers, they went ahead and approved the contracts and the funding so that Black companies had almost zero involvement. Hello?" 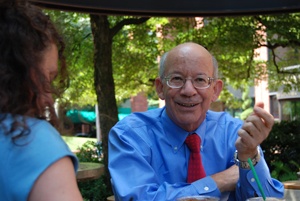 In an interview with The Skanner this week, U.S. Rep. Peter DeFazio, D-Ore., brought up ODOT's poor record in hiring minority contractors as a major concern. DeFazio – chair of the House Subcommittee on Highways and Transit – was in Portland to speak at the Western Association of State Highway and Transportation Officials convention.
"I've had a lot of complaints about their minority enterprise and their lack thereof," DeFazio told The Skanner. "Only a very small percentage of federal dollars make it down to the people who need it most."
DeFazio cited the ODOT Disparity Study, which was made public in November of 2007. "I contacted them when it came to my attention and they said they were working on it," he said.
As ODOT's Disparity Study states, the landmark 2005 ruling by the U.S. Circuit Court on the issue says state transportation departments cannot institute a "race-conscious" disadvantaged business plan without both statistical and anecdotal evidence proving "unequity" in awarding contracts.
The Disparity Study itself  — which NAMCO spent years promoting to ODOT before it was initiated in January of 2007 – would appear to meet the criteria for establishment of better contracting procedures.
"I think the federal law is very clear in terms of the apportioning and I'm hopeful that Oregon is going to get this straightened out – before someone sues them on it," DeFazio said.
Nevertheless, the waiver that would allow race-based considerations in contracting has been languishing at the Federal Highway Administration since January – even as construction dollars for Columbia Crossing have been doled out.
"Even if Peter DeFazio is chair of that committee, he hasn't been willing to hold up any money to ensure that it's rectified," Posey said. "We pay all this money for gas and taxes, and we get no benefit at all – we're not participating in this system on the state level, or the federal level."
Every six years Congress and federal transportation officials pass a bill on highways, bridges and transit to govern spending and priorities for the next six years.
"They came out with this blockbuster report last year that points to a massive budget deficit in transportation infrastructure funding," DeFazio said.
By the numbers, according to DeFazio, the lawmakers are spending half of what state transportation departments want to invest to maintain current infrastructure, and one third of what should be spent to improve the current situation and build better roads and bridges.
"We are falling further and further behind, in terms of transit, because of the high cost of fuel commuters are flooding onto transit today to avoid the cost of using the highways," DeFazio said. "The transit agencies are getting crushed."

Speaking with rep. DeFazio
Rep. Peter DeFazio, D-Eugene, spoke with The Skanner this week on a wide-range of topics. Here is a brief selection:
• On the Fannie Mae and Freddie Mac crisis, in which federal officials are discussing how to keep the home lending giants from going bankrupt:
"(Rep.) Barney Frank, he's working on a bill, he's a smart guy. He doesn't want to let them go the way the administration is – which is letting them have an unbroken line of credit from the treasury. He's proposing a line of credit that's transparent — if they drew from a line of credit, they won't be able to draw any dividends, not in a way that profits the stockholders."
• Is there any movement for senior citizens prescription drugs other than the "donut hole" program?
DeFazio shook his head. He related stories told by constituents about elderly couples coming into their pharmacy, finding out that month's drug prices, and then stepping back from the counter to discuss which of them should get their drugs that month...
"What we did is crazy, the program the Bush Administration actually created is as expensive as possible, because they wanted to benefit the pharmaceutical industry and the insurance companies ...
"Just look at the Veteran's Administration – and there's only about 8 or 10 million people available for drug coverage in the VA and Medicare is 85 million or something. But the Bush administration says it would be unfair to the pharmaceutical companies and the insurance companies to negotiate a better deal.
"Give me a break."