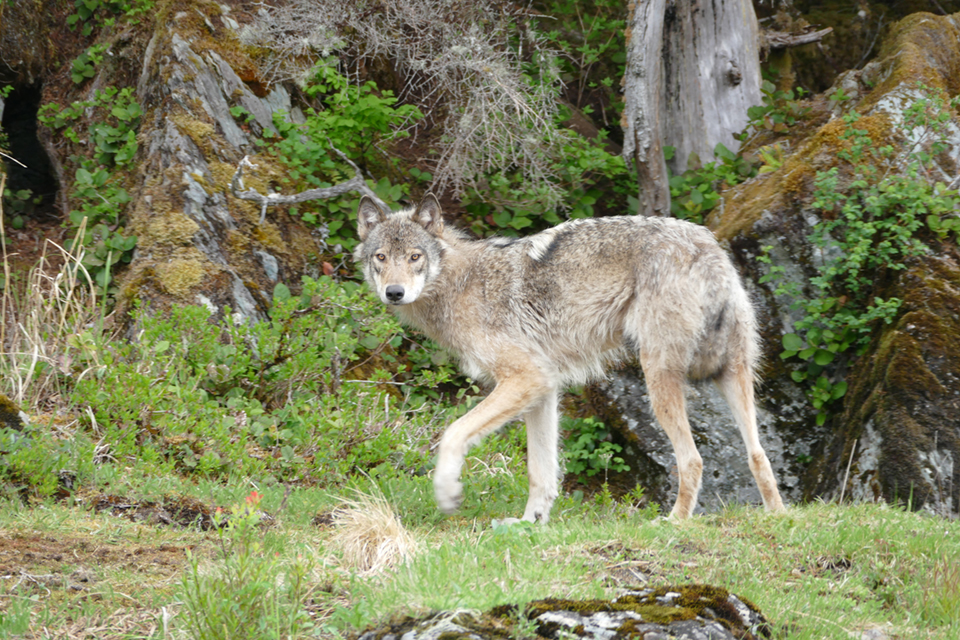 CORVALLIS, Ore. – Wolves on an Alaskan island caused a deer population to plummet and switched to primarily eating sea otters in just a few years, a finding scientists at Oregon State University and the Alaska Department of Fish and Game believe is the first case of sea otters becoming the primary food source for a land-based predator.

Using methods such as tracking the wolves with GPS collars and analyzing their scat, the researchers found that in 2015 deer were the primary food of the wolves, representing 75% of their diet, while sea otters comprised 25%. By 2017, wolves transitioned to primarily consuming sea otters (57% of their diet) while the frequency of deer declined to 7%. That pattern held through 2020, the end of the study period.

“Sea otters are this famous predator in the near-shore ecosystem and wolves are one of the most famous apex predators in terrestrial systems,” said Taal Levi, an associate professor at Oregon State. “So, it’s pretty surprising that sea otters have become the most important resource feeding wolves."

The findings were published today in PNAS.

Historically, wolves and sea otters likely lived in the study area, Pleasant Island, which is located in an island landscape adjacent to Glacier Bay about 40 miles west of Juneau. The island is about 20 square miles, uninhabited and accessible only by boat or float plane.

During the 1800s and much of the 1900s, populations of sea otters in this region were wiped out from fur trade hunting. Unlike wolves in the continental USA, Southeast Alaskan wolves were not hunted to local extinction. Only in recent decades, particularly with the reintroduction and legal protection of sea otters, have the populations of both species recovered and once again overlapped, providing new opportunities for predator-prey interactions between the two species.

The researchers studied the wolf pack on Pleasant Island and the adjacent mainland from 2015 to 2021. Gretchen Roffler, a wildlife research biologist with the Alaska Department of Fish and Game, and others from the department collected 689 wolf scats, many along the island’s shoreline. 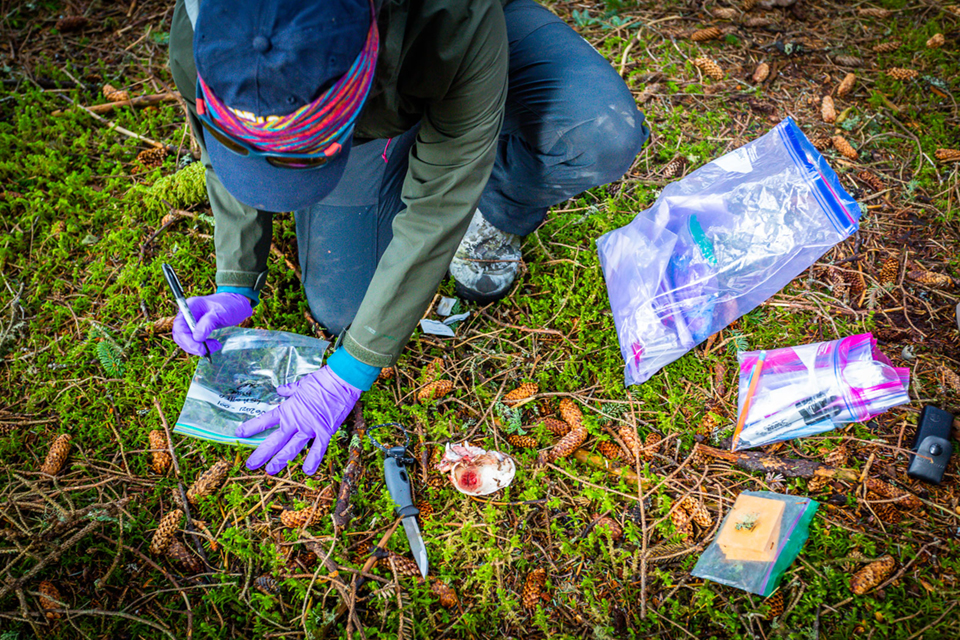 Once the scat is collected, members of Levi’s lab in Oregon used molecular tools, such as DNA metabarcoding and genotyping of the scat, to identify individual wolves and determine their diets.

Roffler also captured and placed GPS collars on four wolves on the island and nine on the mainland. The researchers were curious whether wolves were traveling between the mainland and island, considering other scientists have found they are capable of swimming up to eight miles between land masses. Both the GPS collar data and genotypes of the scats confirmed they were not, indicating that the island wolf pack is stable and that the island is not a hunting ground for mainland wolves.

Locations from the GPS-collared wolves also provide evidence that the wolves are killing sea otters when they are in shallow water or are resting on rocks near shore exposed at low tide. Roffler and her crew have investigated wolf GPS clusters on Pleasant Island for three, 30-day field seasons since 2021 and found evidence of 28 sea otters killed by wolves.

“The thing that really surprised me is that sea otters became the main prey of wolves on this island,” Roffler said. “Occasionally eating a sea otter that has washed up on the beach because it died, that is not unusual. But the fact that wolves are eating so many of them indicates it has become a widespread behavior pattern throughout this pack and something that they learned how to do very quickly.

“And from the work we are doing investigating kill sites, we are learning that wolves are actively killing the sea otters. So, they aren’t just scavenging sea otters that are dead or dying, they are stalking them and hunting them and killing them and dragging them up onto the land above the high tide line to consume them.”

Shortly after wolves colonized Pleasant Island in 2013, the deer population on the island plummeted. With the wolves having consumed most of the deer, their main food source, Levi said he would have expected the wolves to leave the island or die off. Instead, the wolves remained and the pack grew to a density not previously seen with wolf populations, Levi said. The main reason, he believes, is the availability of sea otters as a food source.

The findings outlined in the PNAS paper build on research findings published in 2021 by the same researchers. In that paper they showed – in what they believe is a first – that wolves were eating sea otters. This was documented throughout the Alexander Archipelago, a group of Southeastern Alaskan islands which includes Pleasant Island.

The research has now expanded to study wolves and sea otters in Katmai National Park & Preserve, which is in southwest Alaska, about 700 miles from Pleasant Island. Early research by Ellen Dymit, a doctoral student in Levi’s lab, and Roffler indicates that wolves are also eating sea otters there. In fact, at that location Roffler and Dymit observed three wolves killing a sea otter near the shore.

In addition to Levi and Roffler, co-authors of the PNAS paper are Charlotte Eriksson, a post-doctoral scholar in Levi’s lab, and Jennifer Allen, the environmental genetics lab manager in Levi’s lab. Levi is in the Department of Fisheries, Wildlife, and Conservation Sciences in the College of Agricultural Sciences.