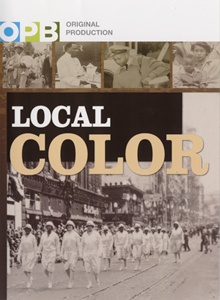 Oregon has a long history of racism and discrimination.
While present-day Oregon is known for a self-congratulating liberal image, Portland State University Professor Darrell Milner says truth is often the casualty.
"You don't appreciate the origins of racism in Oregon," he said.
A newly released documentary will help uncover those ugly truths.
In 1991, broadcast journalist Jon Tuttle created "Local Color," a film that chronicled the little known history of the people involved in the struggle for civil rights in Oregon. The film, produced by Oregon Public Broadcasting, saw only a handful of showings over the next 17 years – its release hampered by a copyright battle over film footage used in the documentary. After solving those disputes, OPB finally released "Local Color" on DVD this week.
"This documentary is a real good knock on the door," said Millner, who says the average person will probably learn something "pretty unsavory" about the way African Americans were treated in Oregon. Whether it was laws requiring annual whipping of Blacks until they left the state, state exclusion laws or real estate redlining, the one-hour documentary puts traditional Black history lessons on watch.
"Once you get a taste of truth, a taste of reality … you don't lose that taste," said Millner, who says the film's release and distribution in schools will help advance the teaching of more accurate Black history in public schools.
Even the film's creator had little knowledge about the way Blacks were treated in Oregon – one of the reasons he set out to make the documentary. After a brief battle with leukemia, Tuttle died shortly after the film was released in 1991. At the time, he was OPB's lead producer for their documentary unit.
The DVD's release also comes at a time Portland Public Schools are embracing a more thorough teaching of state history. In the fall, more teachers will be presenting the Black history curriculum "Beyond the Oregon Trail" in middle school classrooms.
The program, developed by the Portland organization Uniting to Understand Racism, has been used for several years now by some teachers, although this marks the first year it was officially approved by the school district.
The curriculum also will be used in the Hillsboro school district this year. Macceo Pettis, of Uniting to Understand Racism, said the teacher training and district support help change a system that has whitewashed history.
"We're not just victims and bad guys and welfare recipients," he said.
Millner says there needs to be a more comprehensive approach to teaching the history of people of color's contributions — and discrimination — in Oregon.
"Dealing with this kind of history, the first responsibility is to create a context," he said.
The film is available through Oregon Public Broadcasting's website, at www.opb.org, following the links to "shop."

The Central City Concern will be restoring and expanding the African American history display, visible on the outside of their headquarters in the former Golden West Hotel, at the corner of Northwest Everett and Broadway.
Long a piece of Portland's African American history, the Golden West served as the only place Blacks could stay until the passage of Oregon's 1953 public accommodations law. For more information about the hotel and the greater project to restore the African American historical monument and the Golden West Project, visit Will Bennett's website at www.african-american-historical-district.com.
The display's expansion and restoration – sunlight and some water damage has left the displays in need of repair – were made possible through a $9,250 grant from the city's Vision into Action program (an offshoot of visionPDX).

More: A Brief History of African Americans in Portland