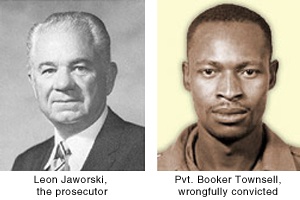 U.S. Army Assistant Secretary Ronald James – the highest-ranking African American – will be keynote speaker and preside over the official ceremonies in Seattle to restore the military honors of dozens of African American soldiers wrongfully convicted in the Fort Lawson murder of an Italian prisoner of war in 1944.
Four days of tributes and events are scheduled July 24 through 27 around Seattle, including the gathering of three dozen soldiers' survivors from around the country, as well as a symposium, a Catholic mass, a dinner, a formal ceremonial tribute, a community picnic, a parade and worship services.
"The Army does not do this – the Army gets tens of thousands of appeals all the time," said investigative reporter Jack Hamann, whose book, "On American Soil," effectively reopened the case -- generations after the event.
"They don't reinstate people," Hamann said. "But not only are they removing the dishonorable discharges, they're negotiating the amount of back pay and restitution to the survivors"
On August 14, 1944, African American soldiers at Seattle's Fort Lawton allegedly rioted against Italian prisoners of war, in what became the only known case of African Americans prosecuted for a mob lynching.
Newspaper accounts at the time claimed the incident was touched off by Black soldiers' resentment of Italian POWs over the Army's favorable treatment of those who volunteered for service projects with the U.S. soldiers. Dozens of American and Italian soldiers were beaten. The next morning Guglielmo Olivotto, a prisoner of war, was found hanging from a tree at Fort Lawton.
Some 43 Black soldiers – and no Whites — were charged; the Army investigation was classified. After the longest court martial of World War II, 23 African American soldiers were convicted of manslaughter for killing Olivotto.
The Army investigation into the incident was classified. Sixty years later it was quietly declassified.
Hamann, who had been interested in the case for years, accidentally came across the papers, which  showed that Army officials knew that no evidence linked the Black soldiers to Olivotto's death.
In October 2007, after publication of Hamman's book, "On American Soil," the Army's Board of Corrections of Military Records overturned the convictions, allowing the cases to be reopened.
More than six decades later, the U.S. Army's highest court of appeals overturned the convictions declaring that their prosecution had been "fundamentally unfair," and that Army prosecutor Leon Jaworski (who prosecuted President Richard Nixon's fellow conspirators in the Watergate case) had deliberately hidden evidence supporting the Black soldiers' innocence.
The restitution events kick off with a symposium called "Race, Justice & the Military," Thursday, July 24, 5 p.m. at Pigott Auditorium at Seattle University Symposium, with a showing of the video: Setting the Record Straight (30 min), by Robert Mak, KING-TV.
The panel includes Betty Dovinh, Seattle/King County NAACP, Major General Timothy Lowenberg, U.S. Army judge advocate general, Professor Robert Chang of the Seattle University School of Law; and Jack Hamann, author of On American Soil.
A reception at Pigott Auditorium will be held immediately following, at 6:30, then at 7:30 p.m. will be a mass at Seattle University's Chapel of St. Ignatius, in memory of Olivotto, the murdered Italian soldier.
On Friday at 5 p.m. is a tour of the Northwest African American Museum for Ft. Lawton veterans and family members, then at 6 p.m. there is the Northwest African American Museum Gala dinner honoring Ft. Lawton veterans and family members.
On Saturday at 10 a.m., there will be a ceremony called "Restoring Honor," at  Discovery Park, including the presentation of belated honorable discharges for Fort Lawton veterans. At 7:30 that night, family members will participate in the Seattle Seafair Torchlight Parade.