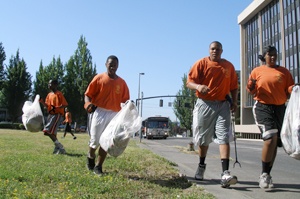 Several high-profile incidents on TriMet have raised the public's awareness of young people's actions on the public transportation system.
A.K. Rucker is hoping his young people will help raise a different kind of awareness.
Every summer now for 10 years, Rucker takes 20 young persons in a trash-cleanup program called First Step. For two months during the summer, Rucker drives them around Portland in a TriMet bus clearing litter out of bus stops and much of the surrounding routes.
Many of the teens are considered at-risk or have already had run-ins with police. Many others are simply students in need of a summer job. As a diverse group of young people, they are very aware of how their behavior and actions with First Step help influence the actions of their peers.
"When one person does something, they reflect everyone else," said Bianca Brant, 17. "But you can't really force somebody to do something."
She and other First Step workers called some of the recent assaults on Tri-Met "shocking."
One of the main tenants of the program is discipline. When two groups of 10 youths are running and picking up trash at a break-neck pace along busy roads, creating order is essential. Each group has safety managers who supervise the crew, making sure cars see them – as if the bright orange shirts weren't enough – and making sure no one strays into an unsafe situation.
Besides cars, the occasional malcontent, thousands of pounds of dirty trash, constant running, heavy lifting and finding dirty needles, First Step volunteers also must contend with following the rules. Don't follow the rules and you could find yourself out of work for two days or running laps.
But despite the occasional need for discipline, most students see this as a chance to keep in shape, earn some money, connect with their peers and prepare for life. About half of the workers this year have done it in years past.
Washington State University Graduate Tamika Lyday said she would never have gone out of state for college if it weren't for the courage and strength she gained from the program, which includes several hours of life and job skills training every week. Lyday was back to work as a supervisor this summer after graduating in the spring with her bachelor's degree.
"I didn't realize my own drive potential until I worked for First Step," she said.
Fred Hansen, TriMet's general manager, says the program's true success lies in the fact that Rucker drives a bus year round – encountering many of his First Step students during the school year.
"That's the kind of support system you have to have," Hansen told The Skanner. "It requires someone like A.K. who sees it as part of the community."
Hansen wants to encourage other businesses and organizations to create similar programs.