The Science of Lullabies: Portland Music Educator Gathers Songs of Soothing from Around the World 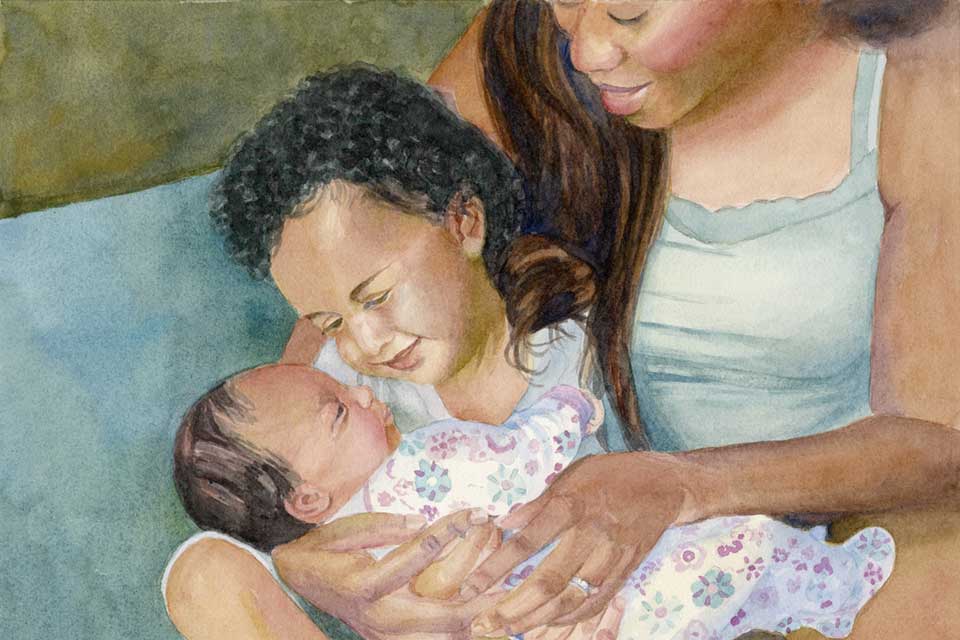 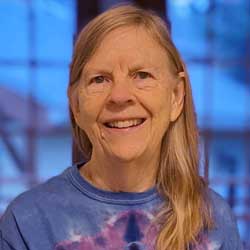 Author and music educator Licia Claire Seaman.Music educator Licia Claire Seaman recalls her father’s tradition after the birth of each of his children: He would waltz around the house with the infant and softly sing the 1920’s hit “The Same Silver Moon.” Elder siblings would join in and later, their father would use the same song to diffuse tension or fussy moods during long car trips.

“Years later I would discover the science behind his wisdom,” she wrote in the forward to her new book “Lullaby Wisdom: The Stories, the Songs, and the Science of Soothing.”

That science builds on what researchers have long known about the importance of touch in creating secure attachment throughout early childhood. The age-old practice of singing lullabies multiplies the positive impact, Seaman told The Skanner.

"It modulates all these wonderful chemicals that are building healthy brains, so that we can have healthy immune responses,” she said. “It increases our circulation, it increases oxygenation in the brain. It’s a natural antidepressant.”

A few years ago, Seaman had an urge to collect “grandmother’s lullabies.”

“My sense was that I knew I wanted to collect something that would be easy to sing, easy for somebody to pick up,” Seaman said. “They could be from all over the world, because we’re global citizens in some ways. We have a world to grow into and be responsible for. So I wanted to increase that.”

Her 35 years as a music teacher made the project a natural fit. After her retirement, Seaman also became increasingly interested in how music could help in “healing the psyche.” So she set about talking to people about what they sang to their children and what they were sung to as children.

“I collected from all over – four continents, five generations,” Seaman said. “And as I began to uncover the science, or the narration, I thought I was collecting songs. People began describing ways they were holding the baby, and they’re describing with their hands.”

It wasn’t long before this interest dovetailed with her study of interpersonal neurobiology, which looks at how human development is impacted throughout life by interactions with other people.

“One Lakota woman who talked to me always put the baby right next to her throat,” Seaman said.

“Later I find out that it’s a wonderful place for the baby because they get a vocal massage. And it also is right next to the person’s vagal nerve, one of the key nerves that allows us to become very relaxed so that we’re ready to rest, and we’re ready to build bodies.”

With each person she interviewed, she brought along a recording device to capture their recollections and their own samples of how they’d sing to the babies in their lives.

“Sometimes I’d meet someone in an airport or in a restaurant or at the post office, and arrange an interview,” Seaman said. “Sometimes friends would know of someone coming to town for a multicultural event. Some were relatives, some were friends of people well-traveled. A lot of it was word of mouth.”

The origin of the lullabies were often folk songs, but not always.

“The amazing part is that 12 out of the 48 songs (featured in the book) were created in the moment of the baby crying,” she said.

“Something comes to them when the baby’s crying.” 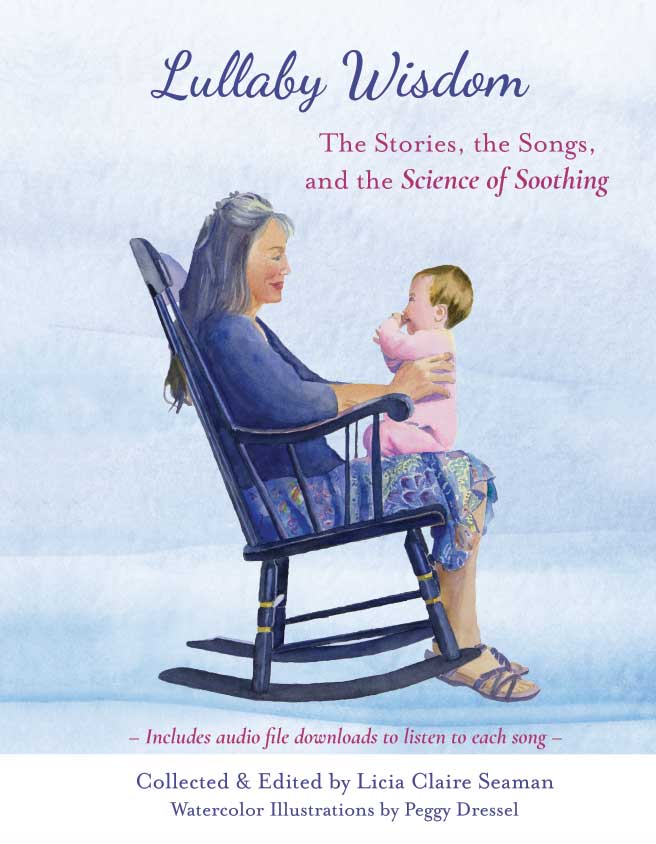 The resulting book is a collection of sheet music, tender watercolor illustrations by artist Peggy Dressel, and the personal stories of the contributors, both men and women, followed by scientific analyses of the benefits of lullaby to both caretaker and child. Seaman says she chose this approach to make the science less overwhelming.

“When I started looking at the science, I found out that so much of that baby’s brain hadn’t even started to be built when they get popped out of mom; they’re so immature,” Seaman said. “Nature’s just getting them out before they get stuck. And so nature has just built up the brain stem so they’ll know how to breathe and digest, and then has built up the emotions so that they know how to attract attention and look loving so someone wants to pick them up, and make the right sound so someone will pick them up, so they can survive. Those parts are mature. But 90% of the brain hasn’t begun.

“And how do we optimize that? Baby needs safety. How does baby get safety? There’s a chemical response to safety. Baby needs to be held, look into a caregiver’s eyes – it could be mom or grandpa, it can be an older sibling that’s loving, it can be uncle who just thought it would be fun to hold baby. They see the eyes, they feel the touch–that eye gaze, and the sound, produces oxytocin,” often referred to as “the cuddle hormone” for how it promotes bonding and a sense of security.

The collected lullabies are in a variety of languages, including Portuguese, Sanskrit, French, Swedish, Lakota, and Gaelic, with lyrics often written phonetically. For each story, there is a link readers can visit to listen to a recording of the contributor singing.

The book’s themes of comfort and healing, tradition and neuroscience, come together seamlessly. Still, Seaman describes a few pleasant surprises she had when writing the book.

A toddler, aged 21 months, created her own lullaby in response to being sung to and in song 12, Seaman describes singing to her five-month-old granddaughter, who later repeated the melody back to her.

“She used her lullaby melody to let me know she needed to sleep,” Seaman said. “It’s 12 notes, repeats of just three pitches – but at five months old! So after that I’d put her down when she’d start doing that.”

Seaman has also been pleasantly surprised by the demographics of her readership.

“Some of these people buying these books aren’t buying it for a new mother or a new grandchild, they’re buying it for themselves to soothe themselves,” she said. “Someone told me, ‘Childhood was not a pleasant place to be,’ and that these soft memories were healing her.”

Others have bought the book as an aid for comforting relatives with dementia.

“Of all the different things we can load into the brain, music is stored all over,” Seaman said, describing how some patients with memory loss will nonetheless remember all the words to songs they enjoyed when they were younger.

Seaman hopes the book will bring inspiration to caretakers looking to soothe the youngsters in their lives.

“We need to hold them, we need to talk to them or sing to them,” Seaman said. “And when we sing and hold them, they build better bones, healthier muscles, more brain, a better metabolism, more immune protection against disease, it lowers inflammation, it calms anxiety.”

“Lullaby Wisdom: The Stories, the Songs, and the Science of Soothing” is available at Broadway Books and at LullabyWisdom.com.