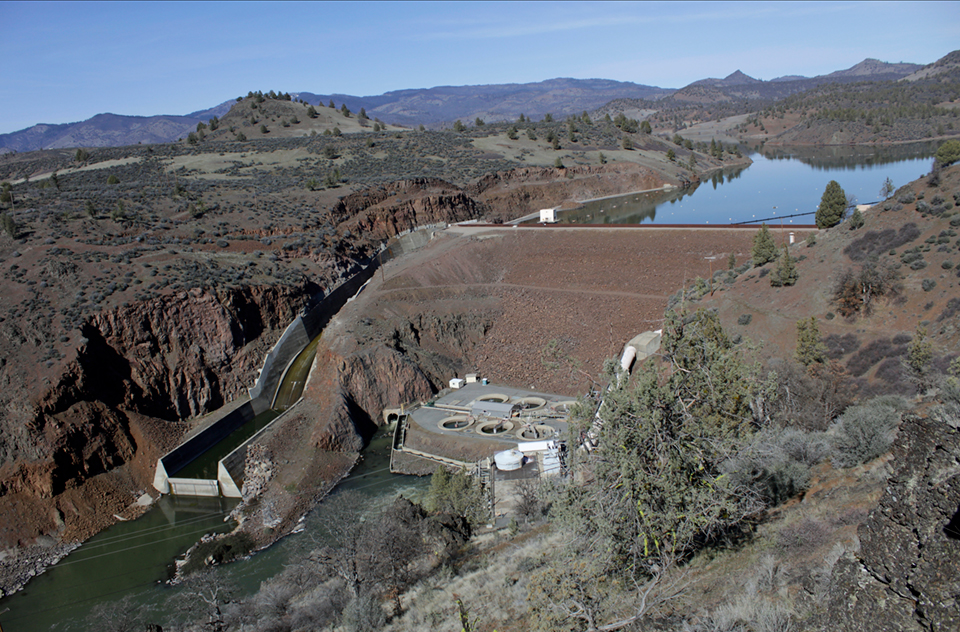 PORTLAND, Ore. (AP) — U.S. regulators approved a plan Thursday to demolish four dams on a California river and open up hundreds of miles of salmon habitat that would be the largest dam removal and river restoration project in the world when it goes forward.

The Federal Energy Regulatory Commission's unanimous vote on the lower Klamath River dams is the last major regulatory hurdle and the biggest milestone for a $500 million demolition proposal championed by Native American tribes and environmentalists for years. The project would return the lower half of California’s second-largest river to a free-flowing state for the first time in more than a century.

Native tribes that rely on the Klamath River and its salmon for their way of life have been a driving force behind bringing the dams down in a wild and remote area that spans the California and Oregon border. Barring any unforeseen complications, Oregon, California and the entity formed to oversee the project will accept the license transfer and could begin dam removal as early as this summer, proponents said.

“The Klamath salmon are coming home,”

Yurok Chairman Joseph James said after the vote. “The people have earned this victory and with it, we carry on our sacred duty to the fish that have sustained our people since the beginning of time.”\

The dams produce less than 2% of PacifiCorp’s power generation — enough to power about 70,000 homes — when they are running at full capacity, said Bob Gravely, spokesperson for the utility. But they often run at a far lower capacity because of low water in the river and other issues, and the agreement that paved the way for Thursday’s vote was ultimately a business decision, he said.

PacifiCorp would have had to invest hundreds of millions of dollars in fish ladders, fish screens and other conservation upgrades under environmental regulations that were not in place when the aging dams were first built. But with the deal approved Thursday, the utility’s cost is capped at $200 million, with another $250 million from a California voter-approved water bond.

“We’re closing coal plants and building wind farms and it all just has to add up in the end. It’s not a one-to-one,” he said of the coming dam demolition. “You can make up that power by the way you operate the rest of your facilities or having energy efficiency savings so your customers are using less.”

Approval of the order to surrender the dams’ operating license is the bedrock of the most ambitious salmon restoration plan in history and the project's scope — measured by the number of dams and the amount of river habitat that would reopen to salmon — makes it the largest of its kind in the world, said Amy Souers Kober, spokesperson for American Rivers, which monitors dam removals and advocates for river restoration.

More than 300 miles (483 kilometers) of salmon habitat in the Klamath River and its tributaries would benefit, she said.

The decision is in line with a trend toward removing aging and outdated dams across the U.S. as they come up for license renewal and confront the same government-mandated upgrade costs as the Klamath River dams would have had.

Across the U.S., 1,951 dams have been demolished as of February, including 57 in 2021, American Rivers said. Most of those have come down in the past 25 years as facilities age and come up for relicensing.

Commissioners on Thursday called the decision “momentous” and “historic” and spoke of the importance of taking the action during National Native American Heritage Month because of its importance to restoring salmon and reviving the river that is at the heart of the culture of several tribes in the region.

“Some people might ask in this time of great need for zero emissions, ‘Why are we removing the dams?’ First, we have to understand this doesn’t happen every day … a lot of these projects were licensed a number of years back when there wasn’t as much focus on environmental issues,” said FERC Chairman Richard Glick. “Some of these projects have a significant impact on the environment and a significant impact on fish."

Glick added that, in the past, the commission did not consider the effect of energy projects on tribes but said that was a “very important element” of Thursday's decision.

Members of the Yurok, Karuk and Hoopa Valley tribes and other supporters lit a bonfire and watched the vote on a remote Klamath River sandbar via a satellite uplink to symbolize their hopes for the river’s renewal.

“I understand that some of those tribes are watching this meeting today on the (river) bar and I raise a toast to you,” Commissioner Willie Phillips said.

The vote comes at a critical moment when human-caused climate change is hammering the Western United States with prolonged drought, said Tom Kiernan, president of American Rivers. He said allowing California’s second-largest river to flow naturally, and its flood plains and wetlands to function normally, would mitigate those impacts.

“The best way of managing increasing floods and droughts is to allow the river system to be healthy and do its thing,” he said. 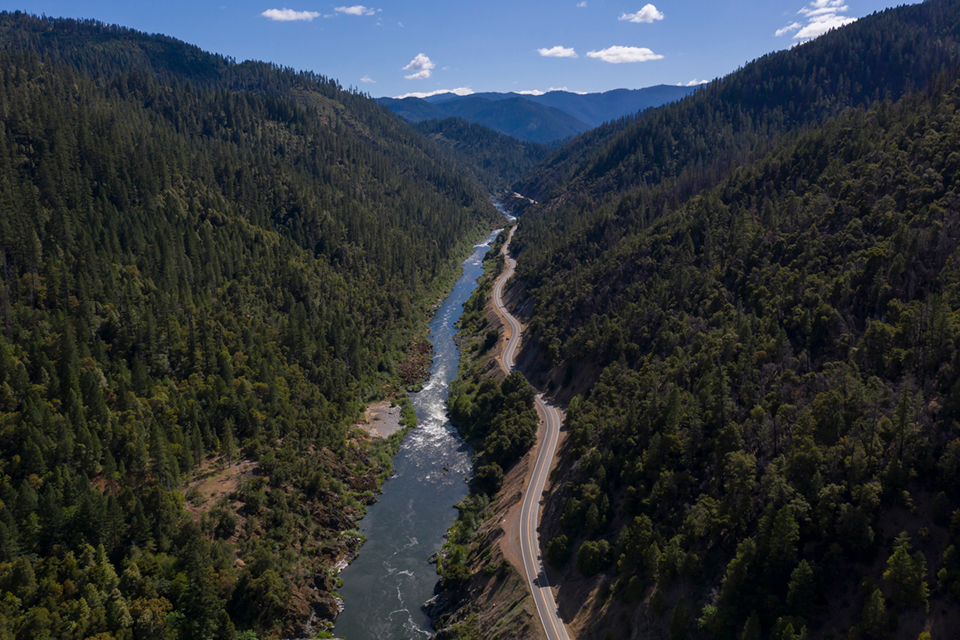 FILE - The Klamath River winds runs along Highway 96 on June 7, 2021, near Happy Camp, Calif. The largest dam demolition and river restoration plan in the world could be close to reality Thursday, Nov. 17, 2022, as U.S. regulators vote on a plan to remove four aging hydro-electric structures, reopening hundreds of miles of California river habitat to imperiled salmon. The vote by the Federal Energy Regulatory Commission on the lower Klamath River dams is the last major regulatory hurdle and the biggest milestone facing a $500 million demolition proposal championed by Native American tribes and environmentalists for years. (AP Photo/Nathan Howard, File)

The Klamath Basin watershed covers more than 14,500 square miles (37,500 square kilometers) and the Klamath itself was once the third-largest salmon producing river on the West Coast. But the dams, constructed between 1918 and 1962, essentially cut the river in half and prevent salmon from reaching spawning grounds upstream. Consequently, salmon runs have been dwindling for years.

The smallest dam, Copco 2, could come down as early as this summer. The remaining dams — one in southern Oregon and two in California — will be drained down very slowly starting in early 2024 with the goal of returning the river to its natural state by the end of that year.

Plans to remove the dams have not been without controversy.

Is the removal enough?

Homeowners on Copco Lake, a large reservoir, vigorously oppose the demolition plan and rate payers in the rural counties around the dams worry about taxpayers shouldering the cost of any overruns or liability problems. Critics also believe dam removal won't be enough to save the salmon because of changing ocean conditions the fish encounter before the return to their natal river.

“The whole question is, will this add to the increased production of salmon? It has everything to do with what’s going on in the ocean (and) we think this will turn out to be a futile effort,” said Richard Marshall, head of the Siskiyou County Water Users Association. “Nobody’s ever tried to take care of the problem by taking care of the existing situation without just removing the dams.”

U.S. regulators raised flags about the potential for cost overruns and liability issues in 2020, nearly killing the proposal, but Oregon, California and PacifiCorp, which operates the hydroelectric dams and is owned by billionaire Warren Buffett’s company Berkshire Hathaway, teamed up to add another $50 million in contingency funds.

PacifiCorp will continue to operate the dams until the demolition begins.

The largest U.S. dam demolition to date is the removal of two dams on the Elwha River on Washington’s Olympic Peninsula in 2012.