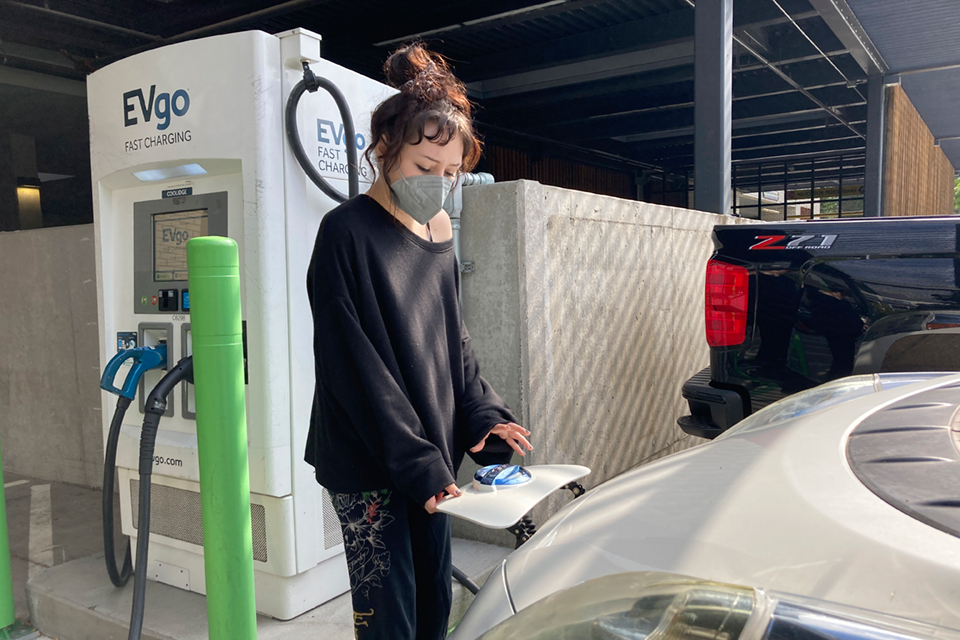 PORTLAND, Ore. (AP) — Stephanie Terrell bought a used Nissan Leaf this fall and was excited to join the wave of drivers adopting electric vehicles to save on gas money and reduce her carbon footprint.

But Terrell quickly encountered a bump in the road on her journey to clean driving: As a renter, she doesn't have a private garage where she can power up overnight, and the public charging stations near her are often in use, with long wait times. On a recent day, the 23-year-old nearly ran out of power on the freeway because a public charging station she was counting on was busy.

“It was really scary and I was really worried I wasn’t going to make it, but luckily I made it here. Now I have to wait a couple hours to even use it because I can’t go any further,” she said while waiting at another station where a half-dozen EV drivers circled the parking lot, waiting their turn.

“I feel better about it than buying gas, but there are problems I didn’t really anticipate.”

The great transition to electric vehicles is underway for single-family homeowners who can charge their cars at home, but for millions of renters like Terrell, access to charging remains a significant barrier. People who rent are also more likely to buy used EVs that have a lower range than the latest models, making reliable public charging even more critical for them.

Now, cities from Portland to Los Angeles to New York City are trying to come up with innovative public charging solutions as drivers string power cords across sidewalks, stand up their own private charging stations on city right-of-ways and line up at public facilities.

The Biden administration last month approved plans from all 50 states to roll out a network of high-speed chargers along interstate highways coast-to-coast using $5 billion in federal funding over the next five years. But states must wait to apply for an additional $2.5 billion in local grants to fill in charging gaps, including in low- and moderate-income areas of cities and in neighborhoods with limited private parking.

“We have a really large challenge right now with making it easy for people to charge who live in apartments,” said Jeff Allen, executive director of Forth, a nonprofit that advocates for equity in electric vehicle ownership and charging access.

“There’s a mental shift that cities have to make to understand that promoting electric cars is also part of their sustainable transportation strategy. Once they make that mental shift, there’s a whole bunch of very tangible things they can — and should — be doing." 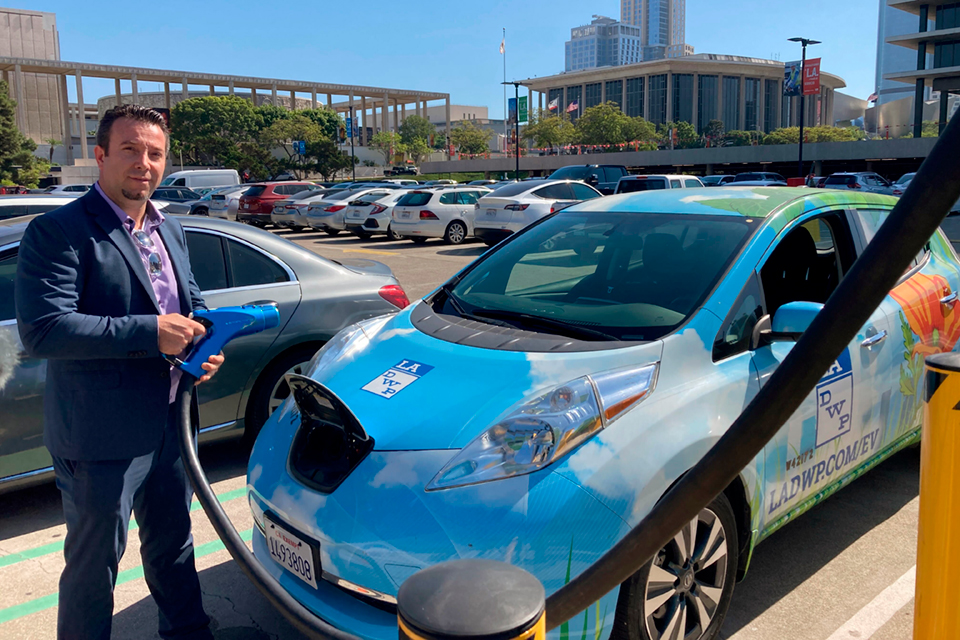 Yamen Nanne, manager of Los Angeles Department of Water and Power's transportation electrification program, charges his electric vehicle using a publicly accessible pole-mounted charger in Los Angeles on Oct. 4, 2022. Los Angeles is a leader among U.S. cities in installing publicly accessible chargers, including 450 on city street light poles and 50 on power poles. Demand is so high that "when we put a charger out there that's publicly accessible, we don't even have to advertise," Nanne said. (AP Photo/Eugene Garcia)

The quickest place to charge is a fast charger, also known as DC Fast. Those charge a car in 20 to 45 minutes. But slower chargers which take several hours, known as Level 2, still outnumber DC fast chargers by nearly four to one, although their numbers are growing. Charging an electric vehicle on a standard residential outlet, or Level 1 charger, isn't practical unless you drive little or can leave the car plugged in overnight, as many homeowners can.

Nationwide, there are about 120,000 public charging ports featuring Level 2 charging or above, and nearly 1.5 million electric vehicles registered in the U.S. — a ratio of just over one charging port per 12 cars nationally, according to the latest U.S. Department of Energy data from December 2021. But those chargers are not spread out evenly: In Arizona, for example, the ratio of electric vehicles to charging ports is 18 to one and in California, which has about 39% of the nation’s EVs, there are 16 zero-emissions vehicles for every charging port.

A briefing prepared for the U.S. Department of Energy last year by the Pacific Northwest National Laboratory forecasts a total of just under 19 million electric vehicles on the road by 2030, with a projected need for an extra 9.6 million charging stations to meet that demand.

Keeping up with demand

In Los Angeles, for example, nearly one-quarter of all new vehicles registered in July were plug-in electric vehicles. The city estimates in the next 20 years, it will have to expand its distribution capacity anywhere from 25% to 50%, with roughly two-thirds of the new power demand coming from electric vehicles, said Yamen Nanne, manager of Los Angeles Department of Water and Power's transportation electrification program.

Amid the boom, dense city neighborhoods are rapidly becoming pressure points in the patchy transition to electrification.

In Los Angeles, the city has installed over 500 electric vehicle chargers — 450 on street lights and about 50 of them on power poles — to meet the demand and has a goal of adding 200 EV pole chargers per year, Nanne said. The chargers are strategically installed in areas where there are apartment complexes or near amenities, he said.

The city currently has 18,000 commercial chargers — ones not in private homes — but only about 3,000 are publicly accessible and just 400 of those are DC Fast chargers, Nanne said. Demand is so high that “when we put a charger out there that’s publicly accessible, we don’t even have to advertise. People just see it and start using it," he said.

“We’re doing really good in terms of chargers that are going into workplaces but the publicly accessible ones is where there’s a lot of room to make up. Every city is struggling with that.”

Similar initiatives to install pole-mounted chargers are in place or being considered in cities from New York City to Charlotte, N.C. to Kansas City, Missouri. The utility Seattle City Light is also in the early stages of a pilot project to install chargers in neighborhoods where people can't charge at home. 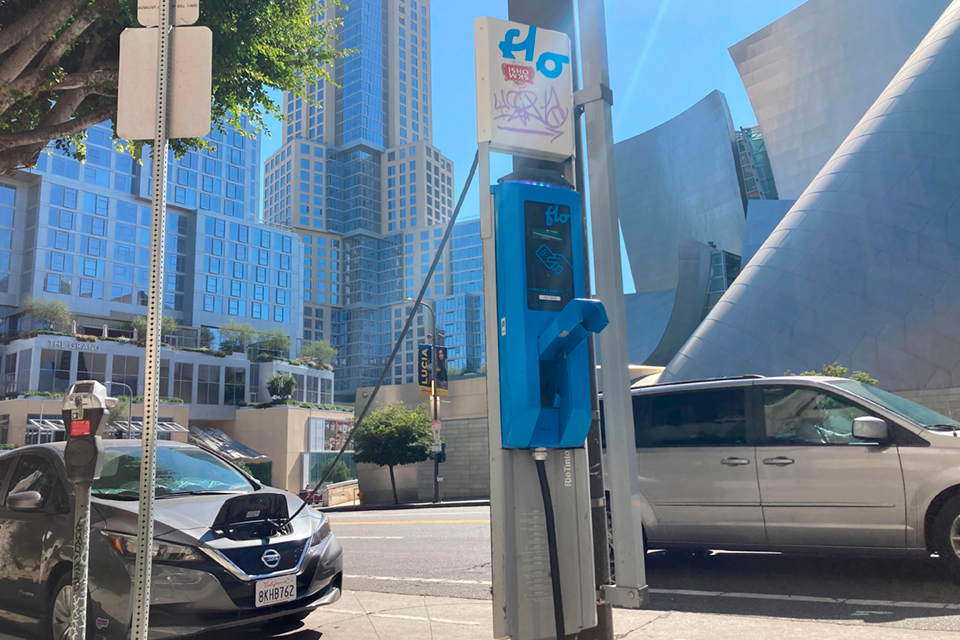 An electric vehicle charges on a publicly accessible pole-mounted charger in Los Angeles on Oct. 4, 2022. Los Angeles is a leader among U.S. cities in installing publicly accessible chargers, including 450 on city street light poles and 50 on power poles. But demand in Los Angeles and elsewhere far exceeds supply when it comes to charging access for EV owners who rent and don't have a private garage in which to power up their car. (AP Photo/Eugene Garcia)

Mark Long, who lives in a floating home on Seattle's Portage Bay, has leased or owned an EV since 2015 and charges at public stations — and sometimes charges on an outdoor outlet at a nearby office and pays them back for the cost.

“We have a small loading area but we all just park on the street," said Long, who hopes to get one of the utility's chargers installed for his floating community. “I've certainly been in a few situations where I'm down to 15, 14, 12 miles and ... whatever I had planned, I'm just suddenly focused on getting a charge.”

Other cities, like Portland, are working to amend building codes for new construction to require electrified parking spaces for new apartment complexes and mixed-use development. A proposal being developed currently would require 50% of parking spaces in most new multi-family dwellings to have an electric conduit that could support future charging stations. In complexes with six spaces or fewer, all parking spaces would need to be pre-wired for EV charging.

Policies that provide equal access to charging are critical because with tax incentives and the emergence of a robust used-EV market, zero-emissions cars are finally within financial reach for lower-income drivers, said Ingrid Fish, who is in charge of Portland's transportation decarbonization program.

“We’re hoping if we do our job right, these vehicles are going to become more and more accessible and affordable for people, especially those that have been pushed out of the central city” by rising rents and don't have easy access to public transportation, Fish said.

The initiatives mimic those that have already been deployed in other nations that are much further along in EV adoption.

Worldwide, by 2030, more than 6 million public chargers will be needed to support EV adoption at a rate that keeps international emissions goals within reach, according to a recent study by the International Council on Clean Transportation. As of this year, the Netherlands and Norway have already installed enough public charging to satisfy 45% and 38% of that demand, respectively, while the U.S. has less than 10% of it in place currently, according to the study, which looked at electrification in 17 nations and government entities that account for more than half of the world's car sales.

Some European cities are far ahead of even the most electric-savvy U.S. cities. London, for example, has 4,000 public chargers on street lights. That's much cheaper — just a third the cost of wiring a charging station into the sidewalk, said Vishant Kothari, manager of the electric mobility team at the World Resources Institute.

That means cities considering pole-mounted charging must also come up with other solutions, from zoning changes to making charging accessible in apartment complex parking lots to policies that encourage workplace fast-charging.

There also "needs to be a will from the city, the utilities — the policies need to be in place for curbside accessibility," he said. "So there is quite a bit of complication.”

Changes can't come fast enough for renters who already own electric vehicles and are struggling to charge them. 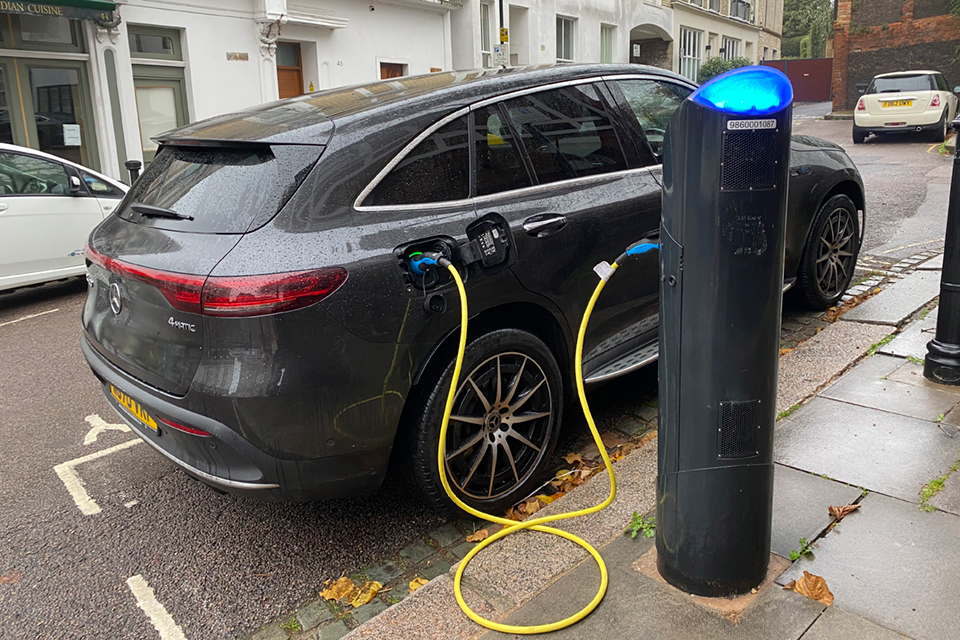 An electric vehicle charges at a public fast-charging station in London on Oct. 20, 2022. London and some other European cities are far ahead of the U.S. when it comes to making fast-charging accessible for renters who can't plug in their EVs at home in a private garage. In the United States, public charging for renters and others without private garages is a barrier to EV adoption. (AP Photo/Courtney Bonnell)

Rebecca DeWhitt rents a house but isn't allowed to use the garage. For several years, she and her partner strung a standard extension cord 40 feet (12 meters) from an outlet near the home's front door, across their lawn, down a grassy knoll and across a public sidewalk to reach their Nissan Leaf on the street.

They upgraded to a thicker extension cord and began parking in the driveway — also a violation of their rental contract — when their first cord charred under the EV load. They're still using their home outlet and it takes up to two days to fully charge their new Hyundai Kona. As of now, their best alternative for a full charge is a nearby grocery store which can mean a long wait for one of two fast-charging stations to open up.

“It's inconvenient," she said. “And if we didn't value having an electric vehicle so much, we wouldn't put up with the pain of it."