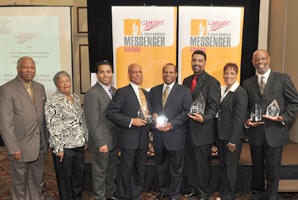 The Skanner News Group won three honors at the National Newspaper Publishers Association national convention last week in Louisville, KY, including the prestigious 2008 A. Phillip Randolph Messenger Award.
Considered the very highest honor given in the field of African American journalism, The Skanner's former news editor, Helen Silvis, has now won the prize twice for the newspaper, in 2005 and in 2008.
The Skanner News Group is the only newspaper in the five western states of Washington, Oregon, Colorado, Nevada, and Arizona, to ever win the award twice.
Silvis won this year's award with a two-part series about the growth of the "green" jobs economy nationwide, and how African American workers in Portland can benefit from the trend.
Reporter Brian Stimson was named runner up for the Messenger Award in the Heritage category, for a feature story about the historic MultiCraft Plastics building in Northeast Portland, which was once home to The Dude Ranch, one of the hottest jazz clubs on the West Coast.
The Skanner also won first place in the Best Use of Photographs category, for a photo display from the 2007 Martin Luther King Jr. Annual Prayer Breakfast.
Pictured above are several of the nation's top African- American journalists and publishers with the Black Press, gathered at the A. Philip Randolph Miller Messenger Awards reception during the 2008 NNPA Convention, held in Louisville, Kentucky last week.
"We are very proud of this award," said The Skanner Publisher Bernie Foster. "Our mission is challenging people to shape a better future now, and this award is in keeping with our values. We are very proud of our staff, which works so hard in support of our values."
Winners received awards totaling up to $24,000, with an additional $5,000 to benefit the NNPA Foundation.
The winners are: Education/Employment — Helen Silvis, The Skanner; AIDS/Health — Robert Jeffrey II, The Atlanta Voice; Cultural Diversity — Christine Sabathia, The Los Angeles Sentinel; Heritage — Francis Taylor, The Los Angeles Sentinel.
The award is named after A. Philip Randolph and the first Black newspaper, The Messenger.