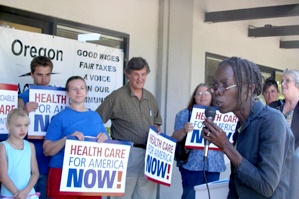 Dozens of activists representing an array of grassroots movements in Oregon gathered Tuesday at the Garlington Center on Martin Luther King Jr. Boulevard to announce a new national campaign for health care reform.
Organizers said Health Care for America Now has been launched by 95 national and local groups representing labor, community organizations, doctors, nurses, women, small businesses, faith-based organizations, people of color, netroots activists, and think tanks.
The groups have gathered a war chest of some $40 million, and announced their new campaign at noon rallies in 53 cities around the nation.
"This new coalition is coming together to draw a line in the sand and say, enough is enough – we need health care and we need it for everybody," said JoAnn Bowman, executive director of Oregon Action.
The Health Care for America Now campaign's goal is to ensure that the next elected president works with Congress to pass legislation in 2009 guaranteeing quality, affordable, universal health care.
Health Care for America Now is an unprecedented coalition led by Oregon Action, ACORN, AFSCME, Americans United for Change, Campaign for America's Future, Center for American Progress Action Fund, Center for Community Change, MoveOn, National Education Association, National Women's Law Center, Planned Parenthood Federation of America, SEIU, United Food and Commercial Workers, and USAction.
"In 2009, we will either have a guarantee of quality, affordable health care we all can count on or we will continue to be at the mercy of the private health insurance industry that is charging us more, giving us less and putting company profits before our health," Bowman said.  "Here in Portland and in communities all across the country, we're asking one question, 'Which side are you on?'  Are you on the side of quality, affordable health care?  Or are you on the side of being left alone to fend for yourself in a complicated, bureaucratic insurance market?"
Starting this week, the national campaign is spending an initial $1.5 million on national television, print, and online advertising and is sending out an email blast to more than 5 million people.
Over the next five months, Health Care for America Now plans to spend $25 million in paid media and have 100 organizers in 45 states.
"As organizations committed to bettering our community, there is no issue more fundamental than reforming our crumbling health care system," said Steve Dixon, advocacy director for Oregonians for Health Security, in a prepared statement.
Health Care for America Now offers a bold new vision for health care
"People work to provide for themselves and their family, most importantly their children," said Felisa Hagins, political director for the Service Employees International Union. "The American people have been backed into a corner by a profiteering health care industry, and we can no longer allow the crippled system in this country to continue."
Health Care for America Now started with a financial commitment of at least $500,000 from each of the 13 steering committee members and a $10 million grant from NY-based Atlantic Philanthropies.