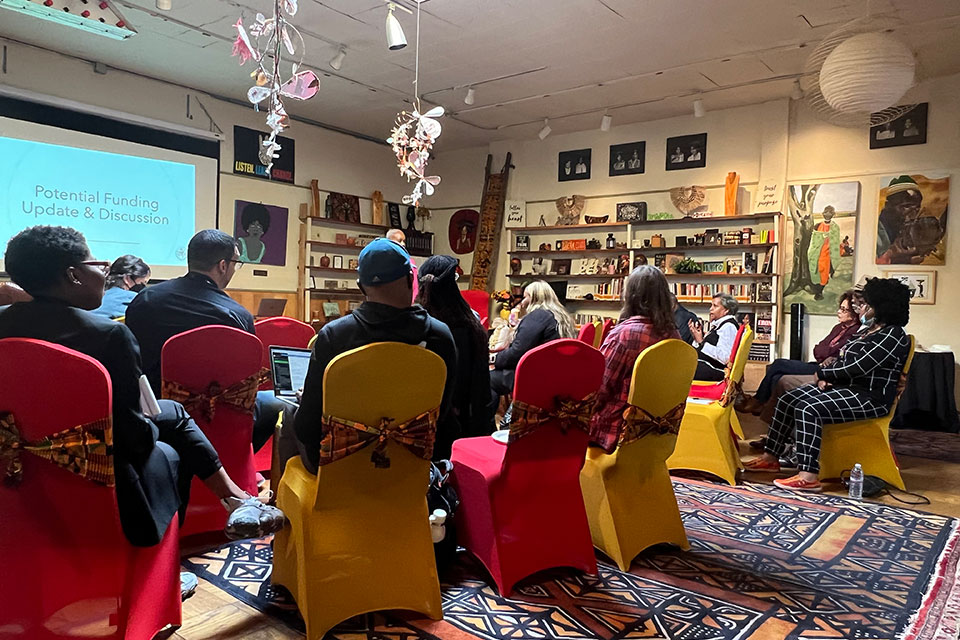 Bonnie Johnson, who is now in her 70s, fondly remembers regularly visiting the former Albina Arts Center, which was just two blocks from her Northeast Portland childhood home. It was a safe place where she felt fully accepted, even though she says she couldn’t read or write well as a child.

“Me and my brothers, we would come here four or five times a week,” Johnson said. “There were adults here who seemed to love us and care about us and wanted us to learn. It was just a place we could eat and have fun and feel safe until our mothers got home. That’s what is missing now. A lot of kids are home, and they don’t have many places to go.” 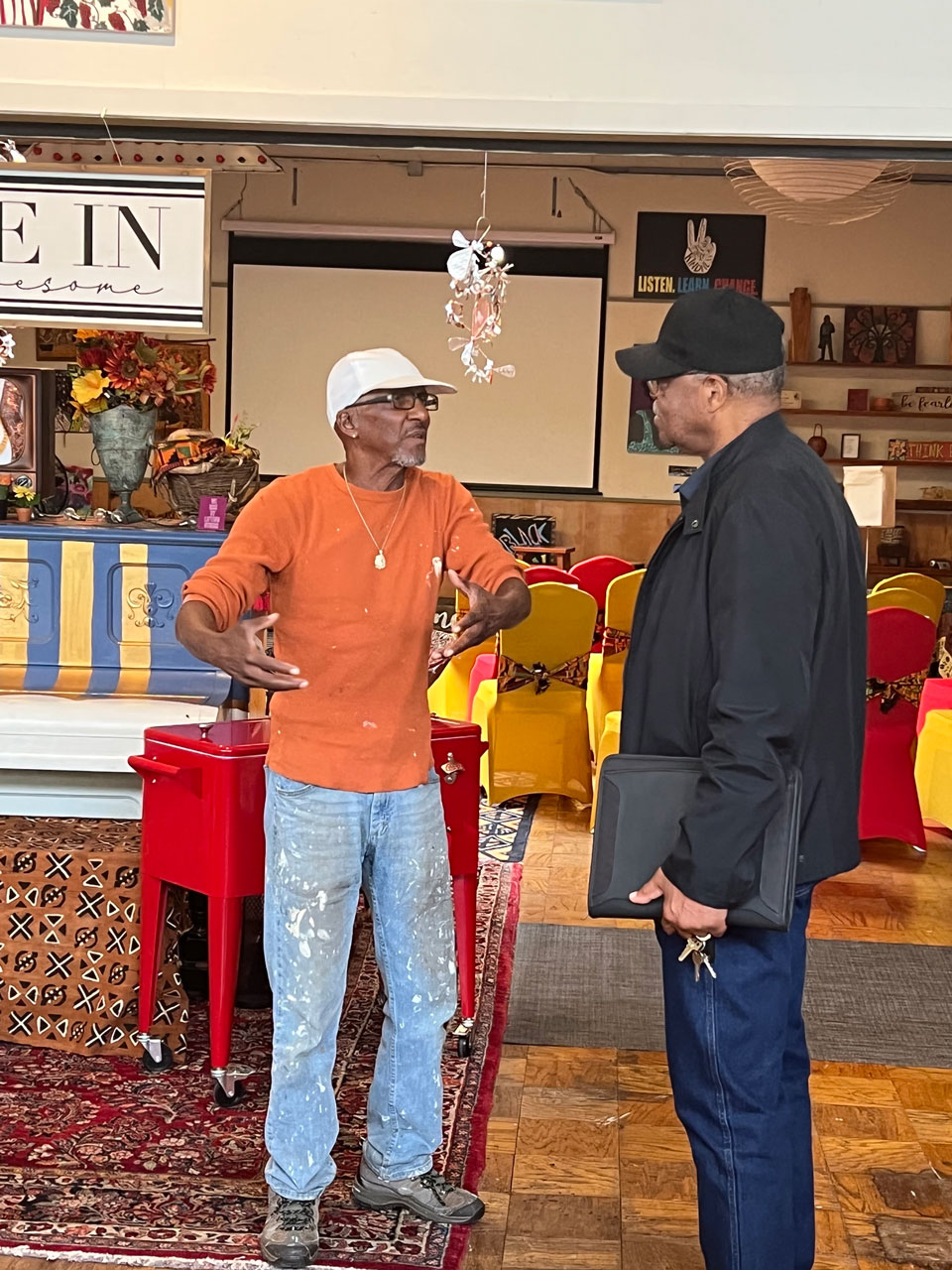 In 2016, after decades of the building falling into disrepair, the Oregon Community Foundation accepted temporary ownership of the one-story structure, at the request of the state of Oregon. Now, OCF is in the process of figuring out how to gift the building back to a Black-led non-profit that is willing to center arts, healing and intergenerational community-building within the space, in perpetuity.

Since June, OCF has organized a community-led visioning process, led by Ericka Warren, a third-generation Portland native and a consultant with Try Excellence, to find the right steward for this beloved community asset. A group of mostly Black organizations and individuals have been meeting online to decide on the parameters that will frame an eventual request for proposals (RFP) process. Last Wednesday the group met in person for the first time.

“If we want culture to be honored here, then we better make sure that who we transfer it to is obligated to abide by the intent of all of us who have participated in this process,” said Jeana Woolley, a commercial real estate developer who has managed the former Albina Arts Center space for many years. Woolley was one of 20 people who attended last week’s discussion in The Soul Restoration Center.

In the early 1960s through the ‘70s, the former Albina Arts Center, located off the corner of Northeast Killingsworth Street and Williams Avenue, was once a significant cultural nucleus for Portland’s Black community. Over the years, it has been a community hub, arts center, meeting place and a source of many cherished memories. Most importantly, it gave intentional space for the development of artistic and intellectual resources within the historically Black Albina neighborhood.

Over multiple discussions over the past few months, the 23-plus participants in the community-visioning process have emphasized the following desired values for the next owner:

The community conversations also have elevated the need for applicants to provide details of the nonprofit’s vision of the space for the next 5 to 10 years; a concrete plan for future creative programming; and a business model that would allow for the building, which needs significant upgrading, to be revitalized and expanded. Although the space has not operated as the Albina Arts Center for more than 50 years, the emotional ties to the space from those who considered it a second home and nurtured their creative urgings within its wall have not waned.

In September Ruby Burns Johnny, who was a part of two no-longer existing, Black-run, creative arts organizations, walked through the door of the former Albina Arts Center for the first time in decades. She was visiting her former hometown as part of a weekend of movement and creative workshops and conversations, organized by photographer Intisar Abioto, a contributor to the Albina Community Visioning effort. At The Soul Restoration Center, Burns Johnny engaged in a public conversation with Bobby Fouther, founder of the Herero Dancers, one of several key Black arts groups in Portland that no longer exists; and Eno Washington, who created one of country’s first integrated dance companies to perform Pan-African movements. Ruby Johnny also used to participate in the Portland Black Repertory Theatre and the Northwest Afrikan American Ballet. 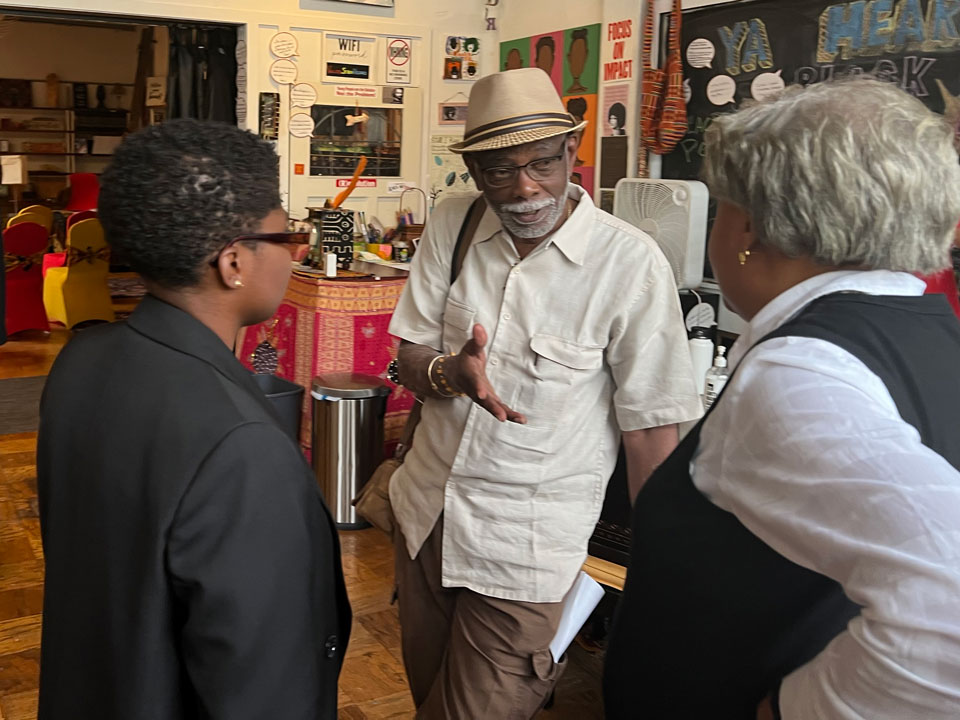 Reflecting on her experience of reconnecting with the storefront space, through programming organized at The Soul Restoration Center, she noted: “It’s beautiful. It’s just inspiring. It’s so uplifting.

"We need to be able to communicate with each other, and work together and solve our problems like we used to do.

"And we need a place like this to do it.”

Musician and producer Joe Bean Keller, who is part of the visioning committee, credits the Albina Arts Center for being the place that nurtured him and a significant number of other Black musicians, groups and band leaders.

“For me, it’s been an encouragement and such an amazing process just to be able to talk about the return of the buildings that were sacred to our community,” he said.

Lisa Saunders, founder of FaithBridge, grew up six blocks from the former Albina Arts Center. As a 5-year-old, she attended day care in the part of the building where she now works, in her 50s, to help women heal from trauma. As an elementary and middle schooler, she learned African and jazz dance and how to model in a fashion show in a part of the building now operating as The Soul Restoration Center.

“I lived a lot of my life in that building,” Saunders said. “I am really heartened that the space is alive again; that somebody is asking ‘What do you want?’ instead of us protesting the tearing down or the redevelopment of the building. To me, this (OCF) process is the opposite of what we have seen done in this neighborhood.”

Members of the Albina Arts Visioning Committee include: